Leaving my Heart to the Flames

"Sometimes letting things go is an act of far greater power than defending or hanging on."
~ Eckhart Tolle ~ 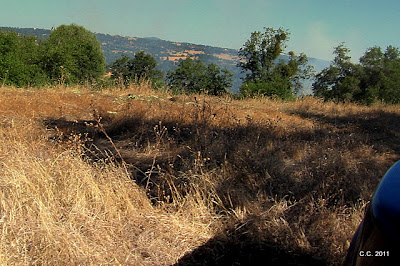 I felt like the fire was on our heels but when we stopped on the ridge and looked back I only saw distant smoke.
I found my camera in my purse. Of all the things that should have been in the car and truck we had taken only these things...Purse, medications, bolt cutters, a vice wrench, two Corgis and the little point and shoot camera. We needed so much more.
We had no time to make these decisions. Our neighbor, "D" called us at about 3:45 p.m. on Wednesday. He was yelling at us, saying that a fire was coming up our hill toward our house.
We had the house closed up and the air conditioning on. We didn't smell or notice anything. We looked out of the window toward the southeast and there was a wall of flame, smoke and sparks coming toward the house.
The Prospector jumped up and told me to grab what I needed  plus the halters and leashes for the dogs. He ran outside and turned the Propane tank off while I got the dogs into the car.
I waited outside near the goats, I told them I was sorry, said a prayer, and in anger thought "Where the hell are the fire trucks." Both our neighbor and my husband had called 911. They said that the fire had been called in.
The fire was moving up behind the house. It was then that I said goodbye to all of this. I let it all go. I didn't take any pictures. I didn't think to take clothing, or important papers. Nothing but the dogs and some medications... and the bolt cutters that we knew we needed to go through a gate on our neighbors property at the top of the hill.
The Prospector was in the truck ahead of me. We had not taken this old road up and over the ridge in a long time. At the top of the ridge I got stuck on a big rock . I tried to back away from it but I was stuck, and the car died. We transferred the dogs to the truck, left the car and drove on up to the old road.
We finally reach the gate and my husband cut a link in the chain that was locked. We passed a truck with a man in it. We explained who we were and that we had cut the locked chain on the fence. He was OK with that. We finally reached the next ranch.
We passed a  bulldozer that was heading down toward our house.  I don't know how he got there so fast. My husband stopped and talked to him for a minute, giving him directions to the house and telling him about the abandoned car.
We drove out past some highway patrolmen and  some ranchers that had their horses ready to load into trailers if the fire moved in that direction. We explained were we came from and why we came through the ranch.
Finally we arrived at the top of Highway 49, drove down to a store and bought some water and a dog dish .
A friend called and said that she would leave the gate open for us... bless her heart. She listened to my hysterical voice on the phone and told me lots of soothing things that calmed me down. Thank you Lori.
Then I called my sister.... Not that she could do anything, being three hours away, but I felt better after I talked to her.
I choose to stay with my husband and we drove back down the river road toward our house.
The sheriff stopped us  and said that we couldn't get down to our road so we waited there with him. Finally a fire supervisor came up and talked to us. He said that the fire was under control and the house was OK.... and the animals too. I could not believe that they saved the house. It was an amazing moment.
They were able to stop the fire because when it got to the open area that the goats graze on, it slowed the fire down enough for them to contain it.  He said that our "defensible space" was the only thing that saved the house.
Shortly there after they let us drive down to our neighbor's entrance and The Prospector walked up to our entrance. I stayed with the dogs.
I watched the helicopters flying over us. 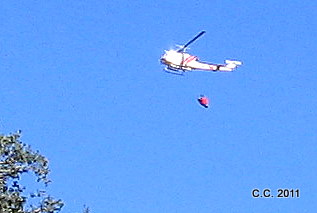 and the bomber going back and forth. The copters dropped water from the river on the contained fire and the bomber dropped fire retardant on everything.
My neighbors came home from work and took me in. They were so wonderful. They even joked about how The Prospector wouldn't have to clear anymore areas for a while. It was a corny joke, but just the comic relief that I needed.

Slowly, as evening arrived, the fire trucks and cars came down off of our road... 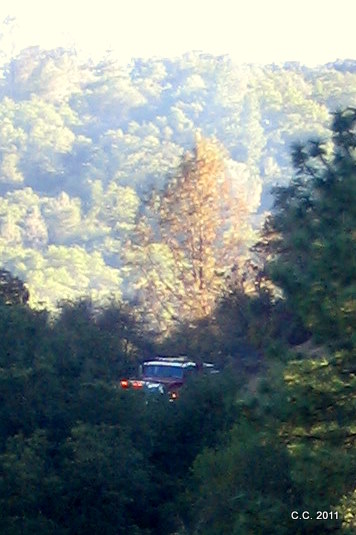 and we were able to go home.

As we drove up past the fireman on the road I shouted a thousand "Thank yous" out the window...


The entrance didn't burn. Nothing looked different except for all the fire trucks and so many people. 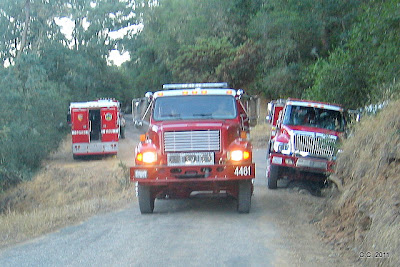 This is such a monumental effort .... 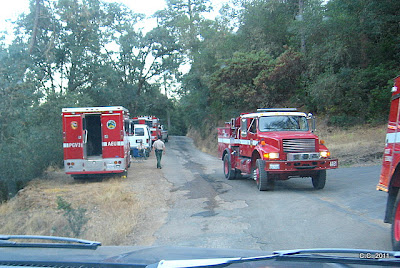 As we drove up the road we started to see the fire damage and the folks that were still putting out the hot spots. 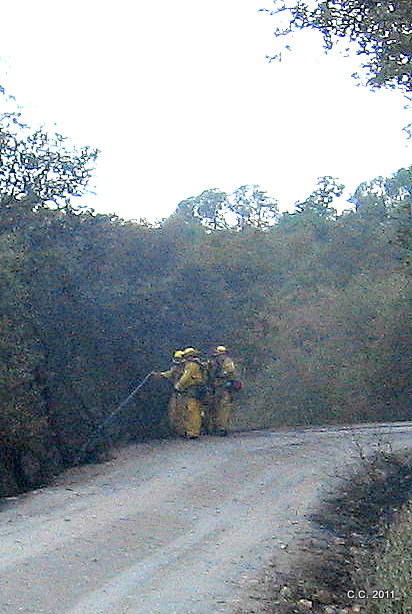 Again, I shouted our thank yous and they waved back. 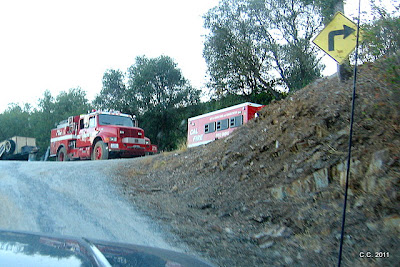 At the turn in our road I saw that even the Pine Grove Dept. of Corrections had arrive with their trainees. These are young men that are serving time for juvenile offenses and are a big help to Cal Fire. There were all here saving OUR house. 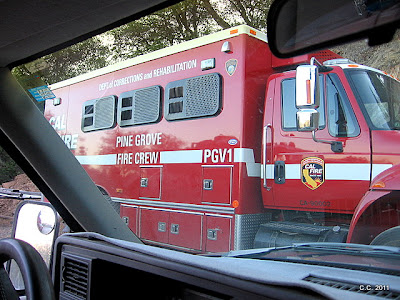 We continued on up to the house. There was a truck in our driveway. We shook hand with more firemen and talked to them for a few minutes. 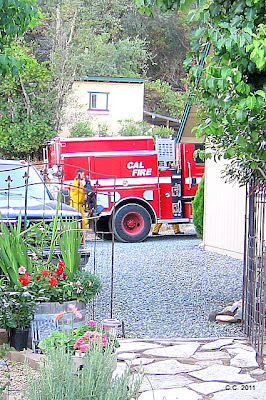 I walked through the gate into the front yard and they were right, our house was actually there. Nothing had changed. I walked over to the edge of the garden and this is what I saw... 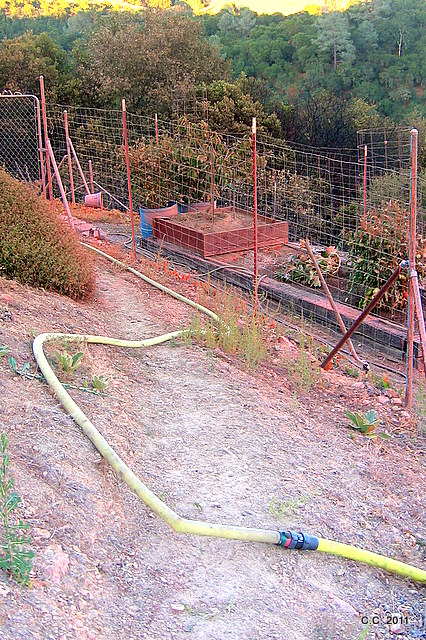 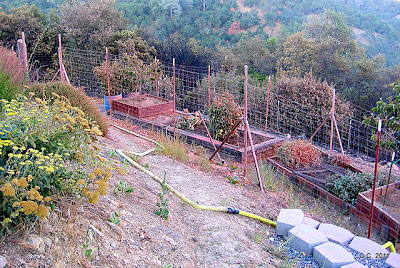 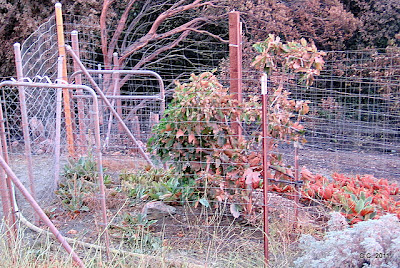 Everything had a coating of orange fire retardant on it.
It was strange and other worldly. 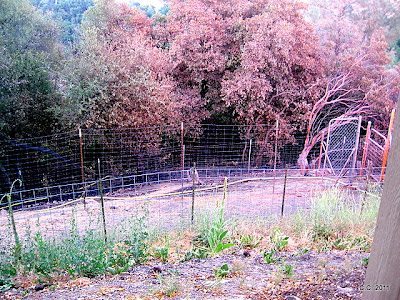 Everything above the fire retardant was not burned... everything below was black. The fireman said that the fire moved very fast but didn't burn hot, so there were a lot of unburned tops of trees. The fire burned fast up the hill, skipped across our road and came straight up to the house.  Late spring rains left moisture in the ground and trees. The defensible space (the goat pasture and the drive way.), the moisture in the ground and the fast control of the fire by the fire crews saved the house. 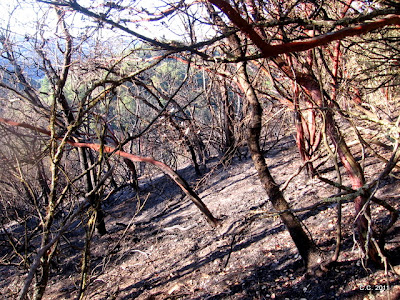 This is what it looks like below the goat run. A forest of burnt Manzanita and Oak. 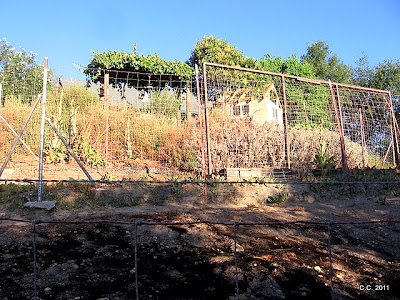 This is a view from the burn area looking up toward the house.

This morning we drove down to see what the fire burned and what was left. 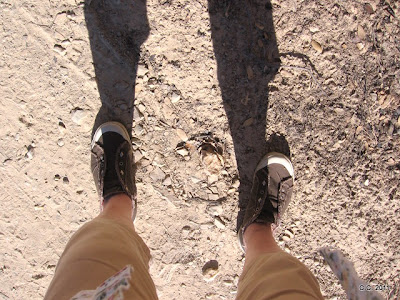 My feet may look like they are on the ground ... 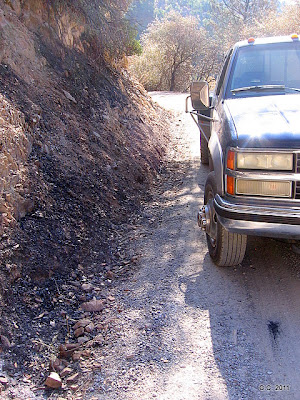 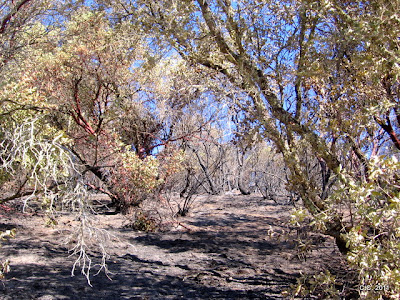