Picking Berries in the Burn Zone 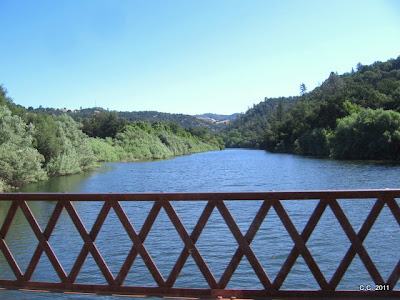 I got a phone call from my friend. "MJ"  in Wallace last week. She  wanted to know if I would like to go berry picking on the other side of the river. She was picking berries along the river road a few days before and met a lady who lived up there. This nice lady invited "MJ" to come back this week and pick berries on her property.

Yesterday morning "MJ" came, picked me up and we drove over the Mokelumne River toward the south. This is where the big fire happen last week and this woman and her husband were right in the middle of it. 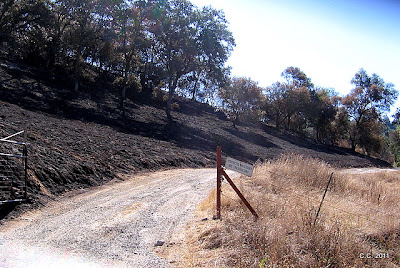 We drove through their gate, up the dirt road and parked in front of this charming house. 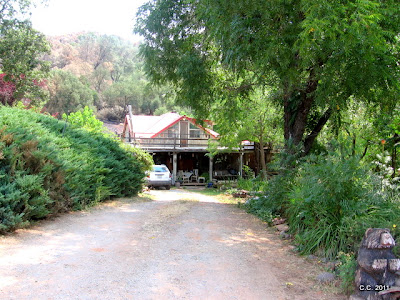 It's an old homestead from the pioneer days of Calaveras County. A home that has been added on to and lovingly cared for by this woman and her husband for the last 20 years and what saved this home from the 100 acre fire last week? First it was the fact that this 80 yr. old owner cleared at least 100 feet all around his house. He worked with the weed eater for a few hours each day for less than a week... a firemen said that was what saved the house.
This is  the view straight across from their driveway. 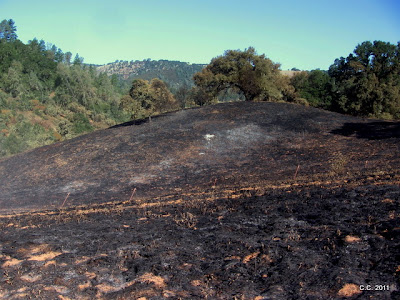 Below is a view from the front of their yard looking up at the next home up the road. The fire completely surrounded this other house. 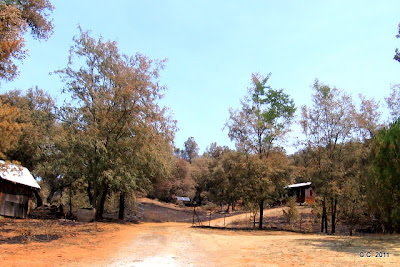 The fireman, crews, spotters, water helicopters and bombers dropping fire retardant were the other "hero's"  last week. It's amazing how none of these homes would have been here if all these people hadn't been working together.
We were followed up the road by a line of fire vehicles. They are still working on clearing and reconstructing trails. They were so nice to this couple. Asking permission to be there and telling them what they were doing. 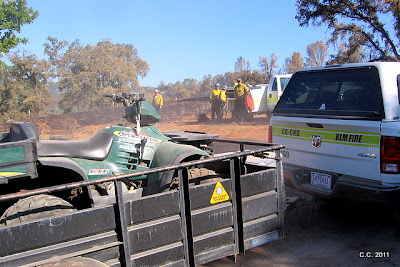 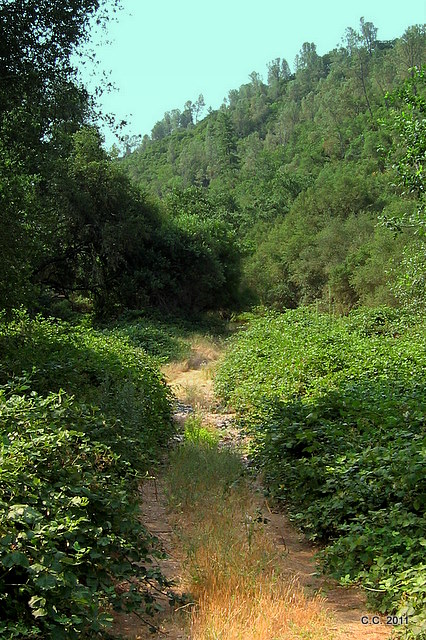 We were given directions  for finding the blackberries. It was a beautiful area and looking from this direction (south) you would never know that there had been a fire here...
But looking north, toward the river and their house, you can see the fire damaged hills. 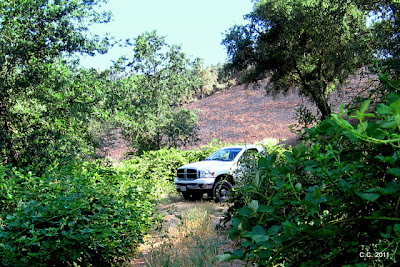 Black and sooty in the distance. 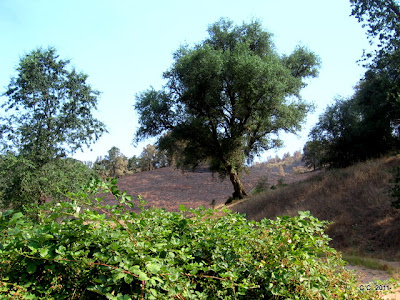 There were berry bushes down a few hundred feet that were burnt to a crisp.
We gathered our containers and started picking. 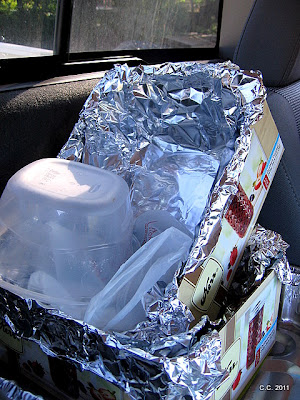 In a few hours I had filled one of my containers and "MJ" had filled two big boxes with these wonderful Blackberries.
I didn't pick as many because of "my problem"... you know, my lack of focus for the work at hand when I'm outside and everything else seems to have equal importance.
I took pictures and picked up rocks out of a small creek and ... took pictures... and listened to the birds... and thought about the fire again... and played in the water... and looked for snakes.. and took more pictures until I remembered what I was there for. If it had been a contest "MJ" would have won, hands down.
Every once in a while I would hear her say, "MARCO.....?" and then I would say "...POLO." So she would know that I was still alive and hadn't wandered off into the hills to survive on Blackberries and squirrels for the rest of my life.
The heat finally got the best of us and we both returned to the truck. We heard another truck coming from the road and it was our host. This 80 year old man not only clears weeds, he grows vegetables too.... at his neighbor's house. He had just picked some giant zucchini that grew all week since the fire and he told us to come back to the house. His wife wanted to show us the inside of their home and he wanted us to take some zucchini home.
**********************
This is an amazing, old homestead that has been added on to  and remodeled over the years that they have lived there. The woman, "J" is a self professed collector of things and she loves to display her collections and paintings everywhere.
She loves her home.
It is a miracle that all of this is still here. Her thankfulness for the fact that the house was not destroyed by the fire was palpable. Just listening to her told us how thankful she was.
Her collections, books, paintings and the way she displayed everything... it was obvious that everything had been done with love... and attention to detail. 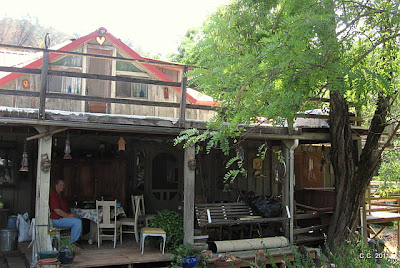 We talked on the porch for a while and then she took us inside.
This is the central hallway... I just love this house. That's real beadboard on the walls. 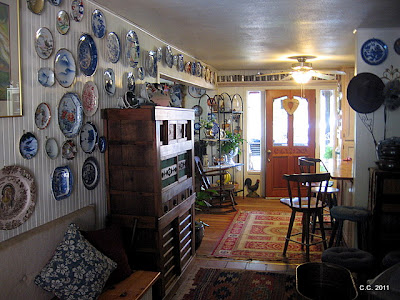 This is her pewter collection... 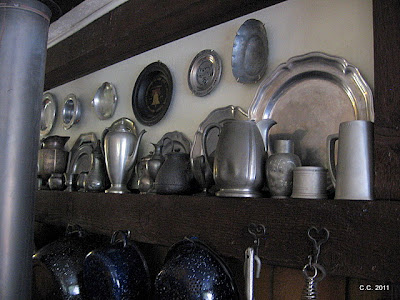 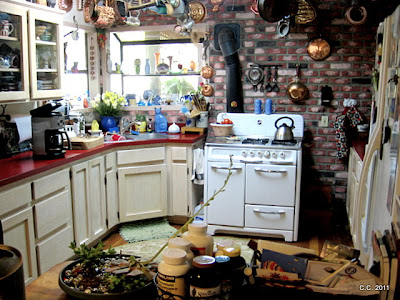 And ... their summer sleeping arrangements.. 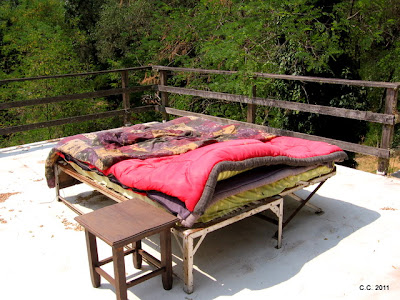 Which has to be monitored a bit because of the traffic that is still moving around the house this week.. although I'm sure that the fire folk are all gone by dark. 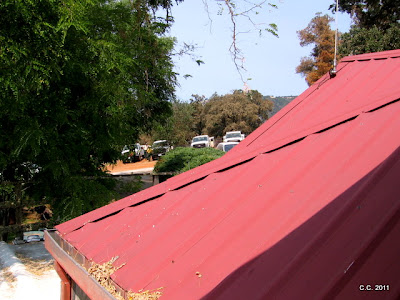 We left with two very large zucchini.. each and were invited to come back next week for more berries.
I will probably stuff one of these guys for dinner tomorrow night.. they make a whole meal. 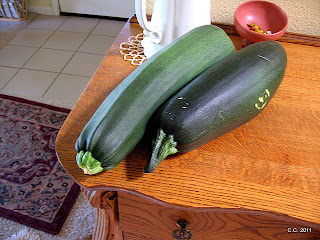 and today I froze three bags of berries and made a blackberry Cobbler for dinner. It doesn't get much better than this. .. 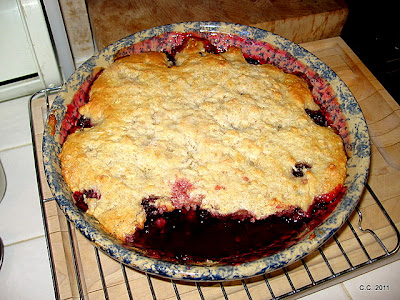 That space at the bottom of the pie plate is where SOMEONE must have eaten some right out of the oven. Hummmm! Must have been a mouse.
My sister is here for the weekend.
Carl and Cutter are really happy about this.... so I'm I.