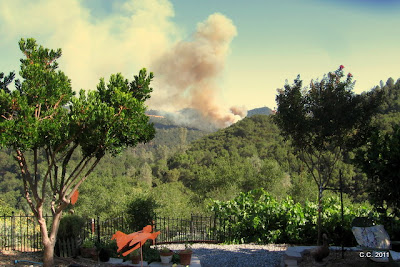 I know it's "Tiger, tiger..." but on the evening before last we had a fire in the canyon that was a little too close for comfort. 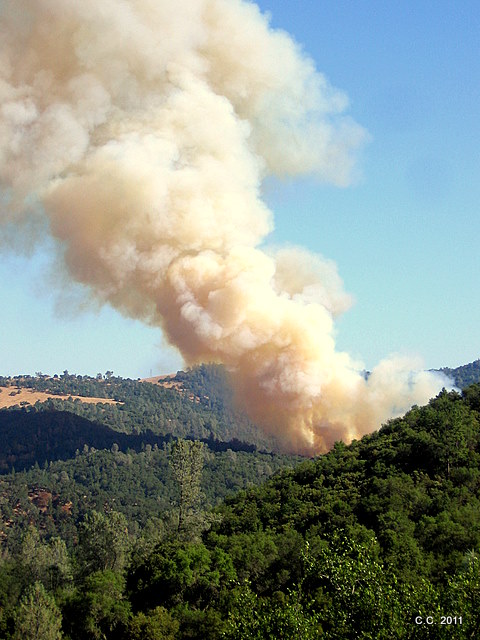 Now, after our close call Friday evening  it's "FIRE, FIRE... burning bright"... I'm sure that William Blake would understand.
Nothing strikes fear in our hearts like a forest fire.  I have imagined being confronted by a wild animal up here.... of coming face to face with Blake's "tiger" (or in this area... a mountain lion) and that is always a very frightening idea.
But FIRE is a constant fear... and present. FIRE is not afraid of humans.
It is a constant fear during the summer months.
And then my fears came true... 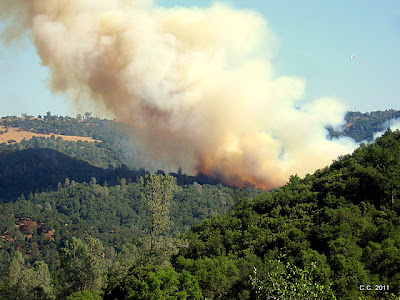 "What immortal hand or eye
Could frame they fearful symmetry?" 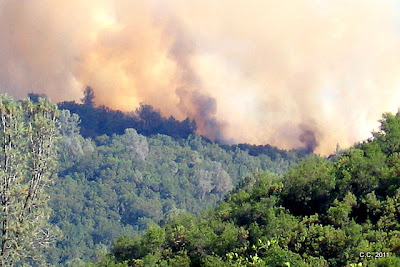 I stood on the edge of our front yard and said a prayer that this was not the one.... the one that would come and devour the land and take everything in its hungry path.
We could not tell if this fire was on our side of the Mokelumne or the Calavaras side.
It appeared to be on our road that goes down to the river. It seemed like it was just down the road.
We called Cal Fire to report the smoke but it had already been called in by others.
A neighbor called wanted to know if we could see anything.
We turned on the scanner to see if we could get any information. 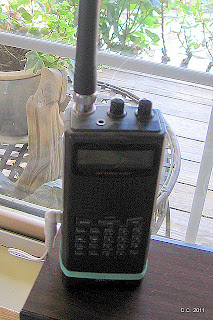 We heard the sirens coming from town... heading down toward the river.

A "wildland" fire is such a danger here. We have not experienced a fire here for in many, many years so this area has a lot of dead underbrush and broken trees branches that are dry tinder for fire.
By mid summer we have a profusion of dry grass that grows next to the roads waiting for a lit cigarette or a careless match.
Did you know how noisy a wildfire fire is? First you hear sirens, then airplanes. The spotter plane arrives and flies in circles over the fire. Someone in this plane calls all the shots. He or she is the fire commander and tells everyone  what to do. 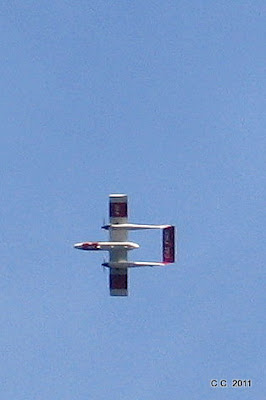 Then the bomber arrives... 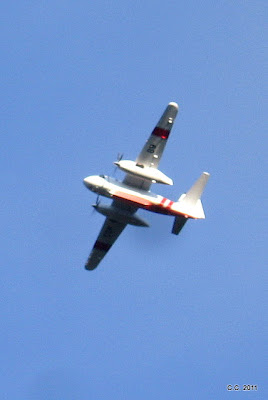 This is the plane that drops the chemical retardant on the flames. 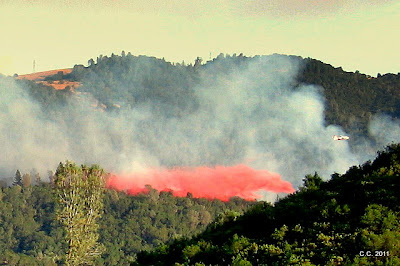 Then the helicopters arrive and carried buckets of water from the river to the fire. 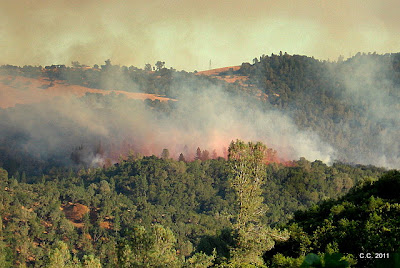 The helicopters, two of them, went back and forth all evening. Like an endless bucket brigade, they never stopped flying... down to the river and back to the fire.
The spotter and the bomber flew over our house again and again. The sound echoed through the hills and continued into the evening. Our life seemed vulnerable and scary even though we finally heard that the fire was on the Calaveras side of the river. 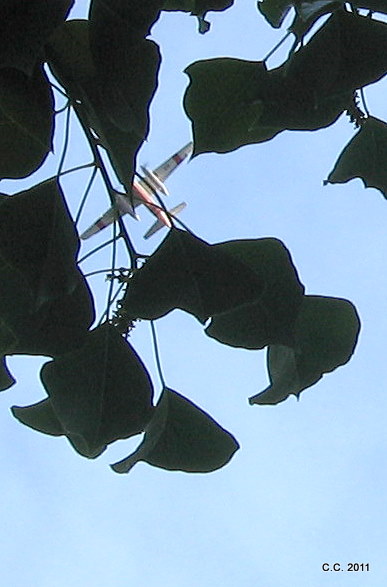 As the planes kept flying over us, I thought about what it would be like if the fire was at the bottom of the hill and my neighbor's house was burning. What it would be like to be covered with that red fire retardant and see the flames coming up the hill. As I have said before... I have a vivid imagination. My brain was in fast forward. I was imagining the horror of a fire... HERE... on the mountain.
A friend called and I hardly remember talking to her. She wanted to know that we were OK.
I don't remember fixing dinner, or watching TV that night.
I couldn't sleep and kept hearing strange noises outside the window. Maybe the goats were talking about what happened. I don't know, but the last sound was another siren going back up our road toward town. I guessed that the fire was under control and they had been called to another "situation".
I heard a coyote answer the siren and then, at some point, I fell asleep.
I dreamed about our house in black and white... 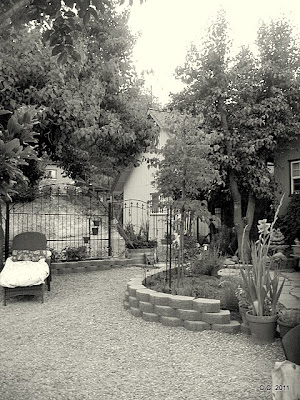 and saw myself running with my animals and other wild creatures. I was trying to carry both Carl and Cutter. There was a red glow behind us. I woke up, shaking.
I went into the livingroom and looked out to the south across the river. I could see a faint glow but the view was clouded with smoke and I couldn't see much of anything. I went back to bed and slept, restlessly, for the rest of the night.
*********************************

We woke early.  The smoke lay in the canyon like a shroud... 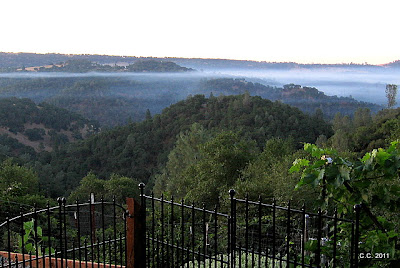 The air was cool. I walked to the edge of the front yard.
The sun was just coming over the distant mountains and flooded us with light. 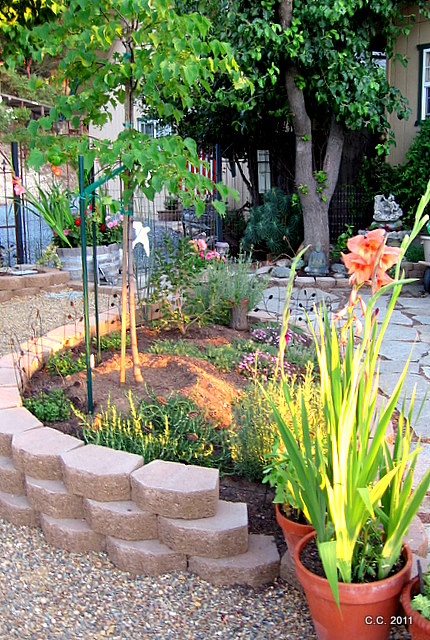 Everything was in color and covered with sunlight. 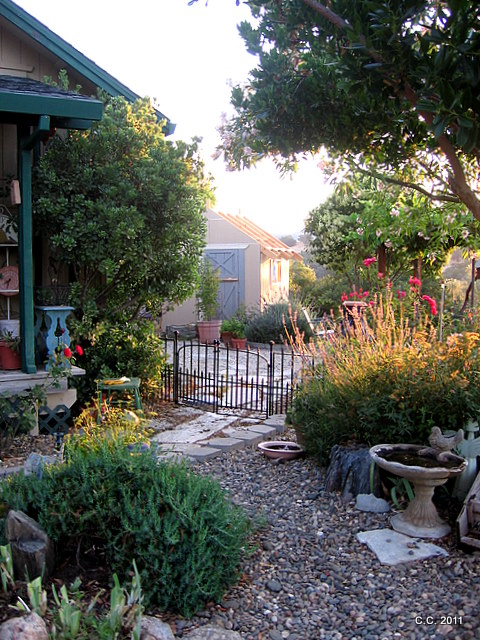 My little unfinished potting shed was still behind the house and everything was good.
I took a deep breath and said another prayer.
This time it was short...
and with gratitude for whatever decides the consequence of things in our lives,
I said "Thank you."