The real California Turkey (Meleagris Californica) went extinct about 10,000 years ago.
So what's this... 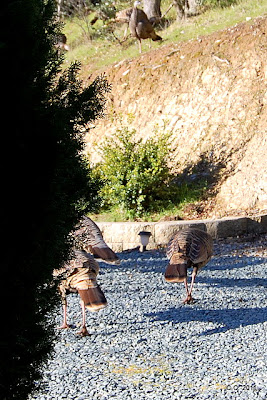 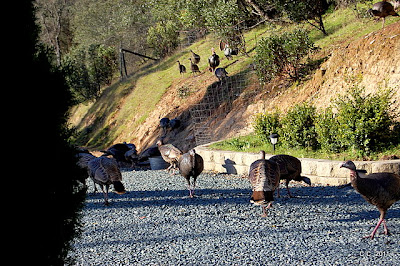 They are everywhere. Herds of them. They come through morning and night. They mess up the parking area with their 'you know what'.
They are in California and they are called  Turkey, so how is it that they are extinct?? Listen to this:
"All the evidence we have on hand about California Turkey is that it was strictly limited to the greater Los Angeles Basin. The fossils are all within that small area, extending north only to Santa Barbara and south (maybe -- fossil i.d. tentative) to Orange County. "
Yes, we're talking La Brea Tar Pit extinct.
They don't look INSTINCT to me and what are they all doing in my driveway? 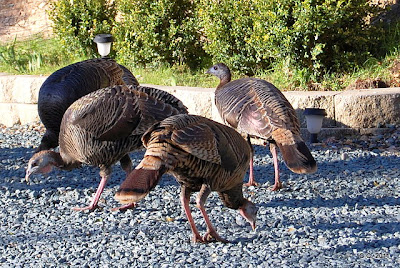 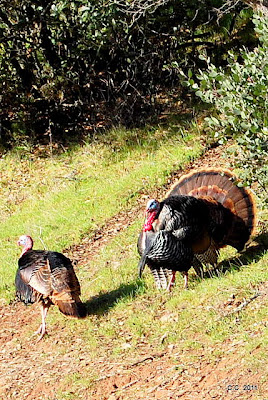 OH!.... the Prospector says it's mating season. Look at this dude!. I've never seen such a blatant display of out of control sexuality in my life. I'm almost embarrassed for him.
Look...., here's one who thought he was hiding in the middle of a group of hens. 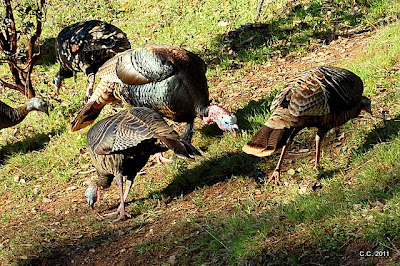 The Tom (that's a boy turkey) was acting all casual and nonchalant like he's just one of the girls.
Then, all of a sudden, he started to transform. 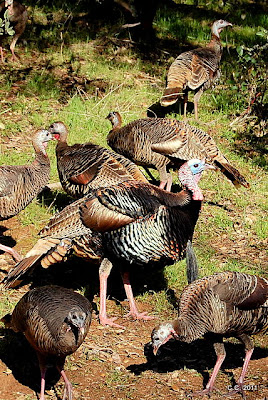 He was getting bigger. He puffed up. But the real transformation started on his head. His eyes got red and he got this fierce look on his face, then his wattle turned red too. By now the hens were suspecting that there was something strange going on and they started moving away. 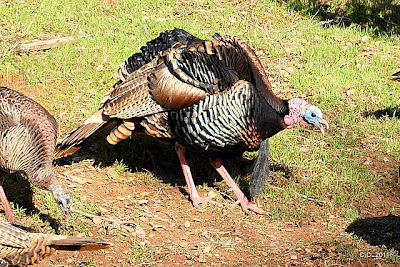 He fluffed up more and started looking really scary. See that skin under his neck? It will get longer and redder. 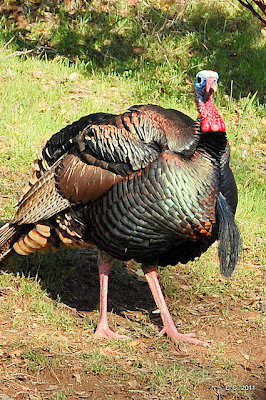 Did you see this? He went from a mild mannered bird to "SUPER BIRD" in about 3 or 4 minutes. It was just amazing and this was only the beginning. 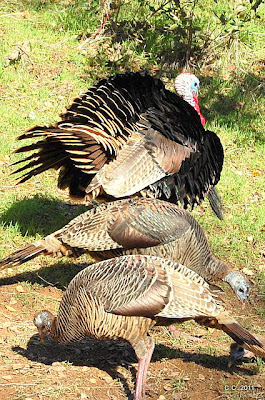 Slowly his tail started going up.... 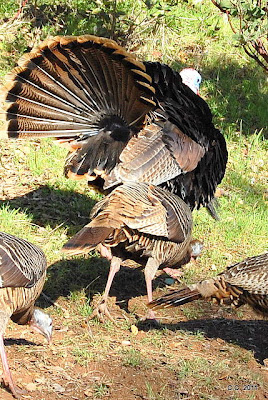 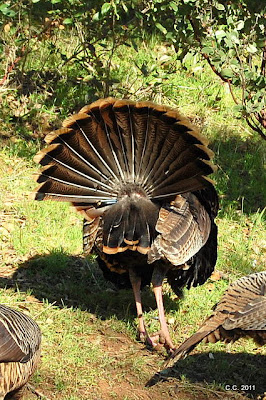 and the feathers spread out in a beautiful fan  across his back. Then he started strutting and dancing around the hens. It was a sight to behold. 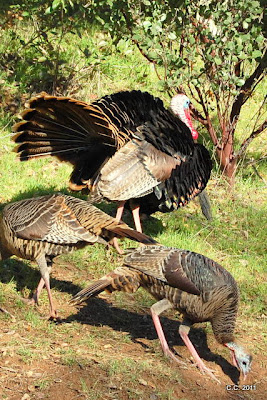 Still, the hens kept foraging and seemed like they could care less. The Tom did this for quite a while and I was getting cold. It was early morning and I had run out there in my PJ's to take these pictures. I was freezing and my coffee was sitting on the kitchen table getting cold .... in my warm house. 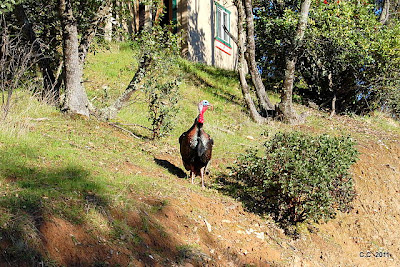 He finally gave up. It was like he had been holding his breath and then let it out. I felt sorry for him. He was deflated. He looked around at all the ladies and I know he was wondering what was wrong with them.... or him. I guess it's an age old story..... 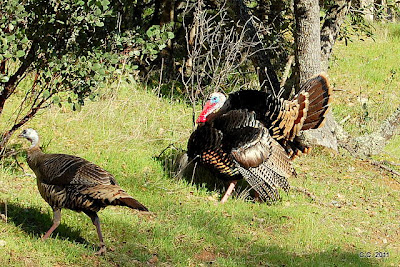 He gave it one more try, but I could tell that his heart wasn't in it. So, keeping his tale feathers spread and trying to save what little dignity he had left, he walked up into the trees with his head held high. 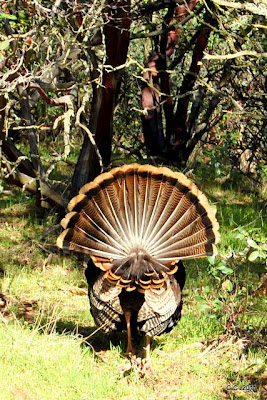 Turkey season in California starts on the last Saturday in March and lasts for 37 days. Bow season is a little longer. I swear to you, on that day these Toms will disappear. It's like they know. Turkey are smarter than you think..... the hens don't have to worry. You can only take one bearded turkey per day.
This is not an endangered species. They are doing well here. In fact, at Three Dog Farm, they seem to have found a safe haven.
I do hope they all move on soon.
Posted by farmlady at 9:51 PM