Oh Brownie, this was scary for all of us.

Yesterday the Prospector called me from the back door. I could tell in his voice that something was wrong.
He said that Brownie was bleeding and would I bring all the pads and elastic wrap in the closet as fast as possible. I grabbed some supplies and ran out to the garage for my boots and caught up with my husband who was already in the goat run holding a towel against Brownies head.
When I got out to the run, there was Brownie without his left horn and bleeding profusely. I'm not going to show you any photos of this horrible mess. I didn't take any. It was awful. Blood was everywhere. I will show you some after we got him bandaged.
Somehow, the scur ( The distorted horn, regrown after the disbudding operation of a goat, sheep or cow..) had been torn from his head. The prospector found it in the goat house later. Blood was everywhere.
We don't know what happen. Freckles head had blood on it too so they may have been playing their favorite game of "butting" together and maybe the game got too serious. Maybe he got caught somewhere and panicked. We don't know. These scurs are not strong like regular horns. They are natures attempt to grow a new horn when a goat's horns have been removed. We have had so much trouble with Brown's horns and you know from my other "Brownie" posts that there have been many issues with these horns growing in the wrong direction and causing all kinds of problems.
But, this was the worst. I'm don't get faint at the sight of blood but when you see one of your farm animals with blood pumping out of a hole in it's head it's really scary.... and Brownie was acting strange. He was not panicky but you could tell that he was in pain and afraid. I sure wished I had a sedative I could have given him but, bless his heart, he let us clean him off.  Finally, after covering the wound with a blue powder that stops bleeding, we were able to wrap his head  with bandages. He didn't like having this done and wanted to move around too much. We needed a milking stall or something we could confine him in but we don't have one. The first try was a disaster. He kept trying to walk away and when a 150 lb. goat want to walk away, he just does it. The bandages fell off. After a second attempt to get the bandages on with the powder packed into the wound, we were successful. Within a very short time the bleeding stopped. That blue powder really works. It's just called Blood Stop Powder and that's what it does. It's a good thing to have on hand all the time. 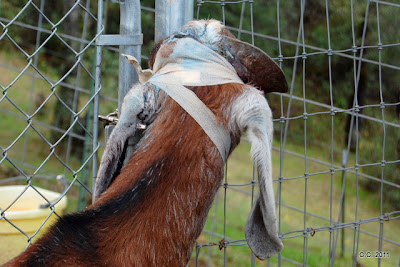 Here he is after we got him isolated from the other goats so they wouldn't bother him for a while... 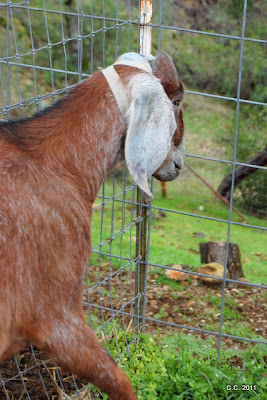 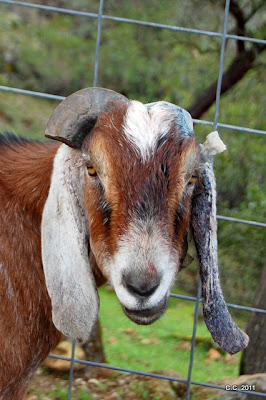 I'm sure at this point in this goat's life he is not as proud of his horns and wishes that he didn't have any.
We watched him all day long and I even checked him last night and early this morning.
He has had his tetanus shot this year so that should be good. We will watch for infection and hopefully it will heal without incident.
This morning all four of the goats were outside in the pasture eating grass and enjoying the sunshine. 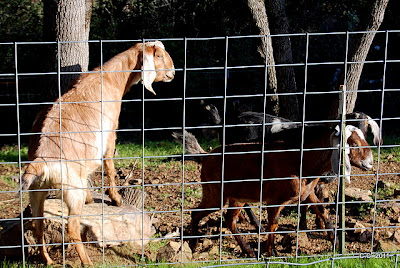 Freckles and Bart are being so careful with Brownie and acting so concerned. They followed him everywhere.  Murph' was quietly eating grass in another area. Interesting. Murphy is always so concerned about Brownie but not this morning. He kind of ignored the rest of them. 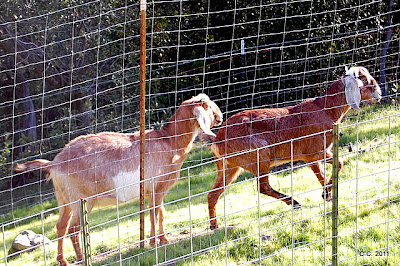 This morning Brownie seems OK. He is active and responsive.
I went on the Internet yesterday after we got the bandages on and you would not believe the varied information that is out there for an incident like this. Everything from putting Cayenne Pepper on the open wound to calling the vet immediately. The general consensus is that this is not serious as long as you get the bleeding stopped. The animal can bleed to death if you don't.
What a day it was. I do agree with someone who wrote that animals horns should be left alone. Few animals have problems with horns if they have the ones they were born with. Maybe we need to change another "man made" and antiquated idea. I would love to know what other farm blogs think about this. Please let me know if you have had this experience.
This is the horn. 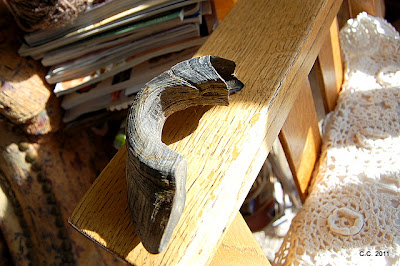 It's an amazing thing isn't it. Almost beautiful. But it was trying to be something it wasn't and that always becomes a fruitless effort. I will keep it to remind me of one of the scariest days in our life on this farm.
We're so glad he's OK. I'm so glad it's the day after yesterday and the sun is shining for Brownie. You know how he likes the sun.
Posted by farmlady at 3:22 PM