Being Productive in the Garden

I HURT THIS MORNING!!
My legs, my feet, my arms, my hips.... Everything hurts. Why is it that working in the garden all day brings me such great satisfaction..... and so much discomfort? I got out of bed like an old lady this morning. Oh, wait a minute. I am an old lady.
Yesterday was one of those wonderful Spring days here in California. I think I could live inside of a day like this 365 days a year. The breeze was cool, the sun was warm and the soil was soft. My love affair with my garden begins again.
This is where it started. I went to WalMart the day before and got a bit carried away. 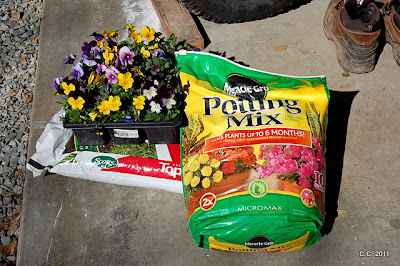 The Pansies were so beautiful. They just shouted "Springtime!!" from the shelf outside the store. So I came home with a flat of them. Actually, it was a half flat for $5. That would give me the color I wanted for my dreary containers. And, of course, I had to get some soil amendments to liven up the old dirt in the pots and add some compost from the veggie garden composter.
I got a little carried away with the flower seeds. 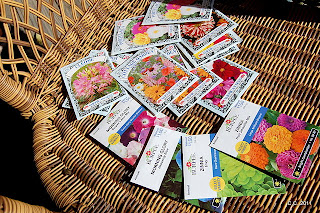 COSMOS~PORTULACA~CLEOME~ZINNIAS..... The American Seed Co. has these beautiful packets of seeds for .20 cents a piece. I don't know how they can sell a package of seeds for .20 cents. I'm guessing that there aren't as many seeds inside (I will count them and see) compared to the Burpee packet that costs $1.50. and the Burpee brand says that they are a "select variety" from Holland. At .20 cents a packet I can buy a lot of seeds, different varieties and it feels like I'm getting a real deal.
I do buy the Burpee brand for seeds that I can't find elsewhere, like the Zinnia called Envy. It's a beautiful CHARTREUSE color and huge. It's a $1.50 also. Sometimes you just have to splurge.
I also bought a few packets of American Seed's "Cottage Garden" seeds. I love them. I throw them into my planters and it's like a surprise later on to see what comes up. This wildflower mix gives the garden a lot of color with very little effort. I'm into the "Cottage" look in my garden.
So, yesterday morning, I put all the new garden supplies into my wheelbarrow and spent the day in the garden.
I planted those Violas everywhere. 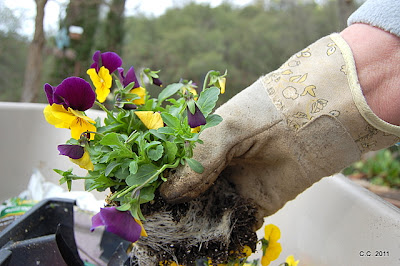 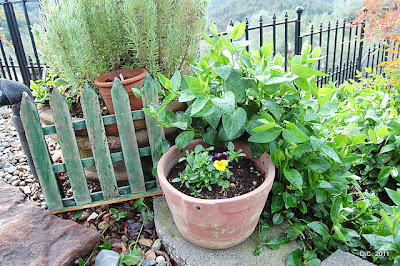 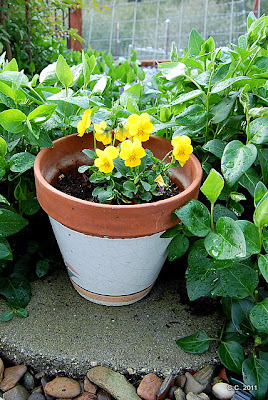 And now I have color all over the front garden. It looks wonderful! 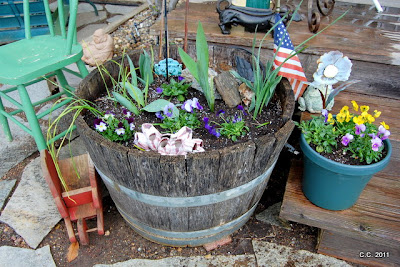 At some point, and this is becoming a ritual behavior, I take my gloves off because I can't feel the soil. I don't know why. I just love the feel of the soil and packing it down with my bare hands. 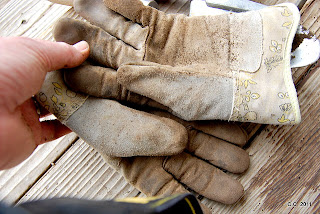 I haphazardly throw them down somewhere because I'm "in the moment" with my garden.
But I have Carl. He is Little Mr. Opportunity incarnate. He always finds them. 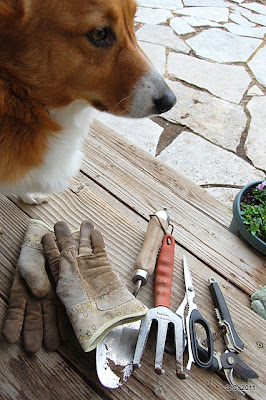 And I always think that he will leave the gloves alone, especially when they are in plain sight on the porch.
But NO..... 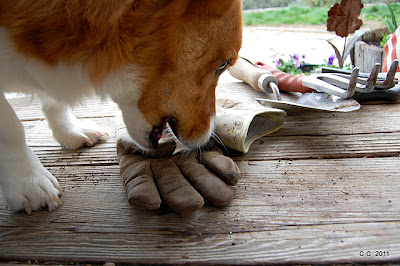 He always grabs one glove. ALWAYS!! and runs away with it.. It's our game. If I didn't like this game I would put the gloves up on a table  where he couldn't grab them. But I don't. Because this is a game, you see, and Carl would be so disappointed.
I run after him, calling his name and telling him to give me the glove. Like I said.... it's a ritual. A bit of comic relief. It's what we do around here to entertain ourselves.

So, back to the garden. I love that feeling of dirt under the nails. 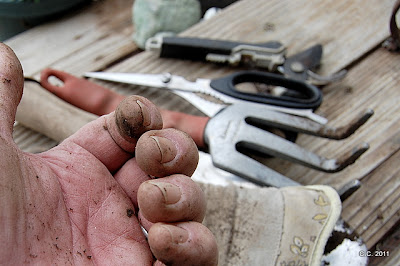 I never regret taking my gloves off. I will always have hang nails and cuts in the Springtime. It's OK. It's tradition.

It was not the planting of violas that  made me feel like I was a hundred years old this morning.
It was this corner of the garden. 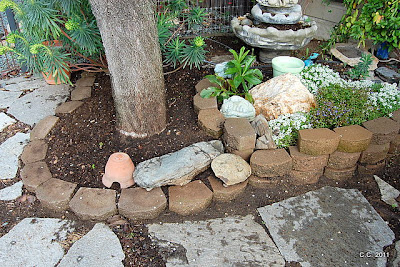 This is the cause of all my pain. It wasn't enough to plant some flowers in pots. I also spent the rest of the day redoing the area near the entrance. Now that I look at the photo I realize that it doesn't look that much different for all the lifting of rocks, raking of debris, moving of garden art and transplanting of a few perennials. But I wanted to clear everything away from the flowering Pear tree because I read that having too much mulch or plants that get watered a lot right up against a tree can weaken the tree and make it vulnerable to diseases. When I removed everything, I saw that there was mold all the way around the bottom of the tree. So I felt really good that I did this.
It looks nice and I feel better about the tree. Cutter, my sweet puppy, proceeded to dig a hole in the new spacious plot of dirt, which he thought I made just for him. Then, I realized that I may have to put a little fence around the area to discourage the pups from this favorite activity. Digging is not a "ritual" I wish to encourage .
All in all it was a very productive day.
***************
Brownie is recovering slowly except that the other goats are ostracizing him. They won't let him into the goat house. Last night I went out there because I heard him making goat complaints and there he was, standing in the rain, crying and complaining. Bart was guarding the doorway and blocking Brown from going in.
IT WAS RAINING! and DARK.  I tried to push him in and every time he tried, one of the goats would push him back out.
BAD GOATS..... even Murph' was part of this betrayal. I'm so upset with them. I know this is normal animal behavior but it stinks.
Finally, with encouragement, Brownie pushed his way into the goat house and I went back into my warm house.

*************
So, this morning I woke up feeling like I fell down a mineshaft and survived. It's not raining. I should be out there finishing the planting of seeds.... but I'm not. I'm rubbing Aspercreme into my feet and hands. I'm laying low for the day. I'm writing this post and  not much else. I feel really old and sore today. I can identify with Brownie. Maybe I'll sit and read a book. Yea! I said read a book... or maybe I'll knit something.... or felt.... or bake some cookies.... or....