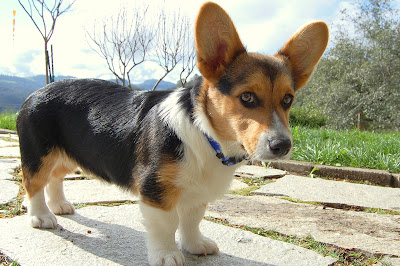 His eyes are brown and he has more dark color on his face than Carl does. He's 5 months old. He's been to Oregon and back. He is cautious and smart; two Corgi traits. But this little guy is a lover and when he gets in your lap he wants to hunker down and put his head under your arm..., or he leans back and puts his head up and licks your face. He is just a sweet little dog. 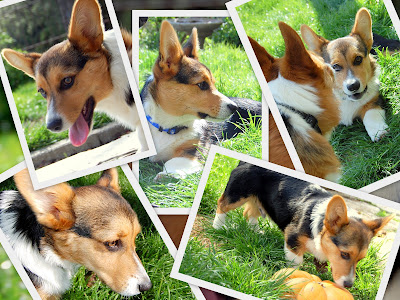 When we got Cutter home, he and Carl played on the lawn and ran around the yard together. They wrestled and growled and stared each other down and then wrestled some more. Cutter is going to be so good for Carl. When Carl wanted to play with Maggie she couldn't do it. Now he has met his match. They play hard and then they rest... 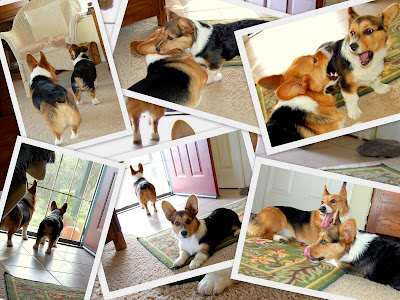 ...and then they go at it again. All the posturing.verbal exchanges, snorting and heavy breathing starts every time one of them looks at the other. It's hysterical!!
By today they seem to have come to some agreement. They sit together and watch the activities around them, pretending to be fierce watchdogs. I shouldn't say "pretending". That will hurt their feelings. They really are good watch dogs, as long as an intruder doesn't see them first. They can look really mean (upper right photo) in their own Corgi way, but they are the proverbial "bark is worse than their bite" dogs.
Carl is being very good about all of this. He has become the "uncle" and I think he rather likes the title.., until, of course, Cutter takes the BIG WHITE BONE and starts chewing on it. I can see the dilemma in Carl's eyes. Should he let this new friend play with and chew on his favorite bone or attempt to take it away? Some things are sacred. Some things shouldn't be shared. I'm sure that they will work this out. In the meantime we have given Cutter some other toys to play with. He seems to be OK with just about anything.

It's livelier around here. Two young pups keep us hopping and when summer comes it's all about the Rattlesnakes again and we will have to confine the dogs and restrict their movement around the property but, for now, it's OK. We love these little guys and we know we made the right decision to bring Cutter home. Carl is not sure.., yet but I'm sure he'll be fine. He just needs a little time.