Happy Birthday To You Baby Bean 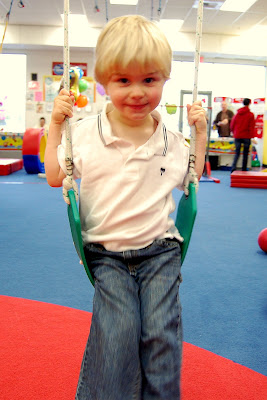 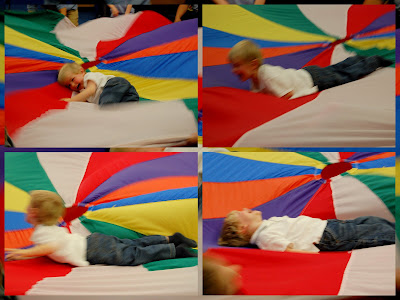 Mommy, Daddy and The Bean( his older brother ) had a party for the little Bean in Elk Grove, at a place called MY GYM. It's one of those wonderful "kid" places that is so perfect for a child's birthday party that you wonder why no one ever thought of this kind of business before. It's a kid's paradise. Structured play with all kinds of exercise and supervision. Both of my grandchildren have been going to this "gym" since they were babies.
I think that Baby Bean had the most fun of all in the parachute (above). Everyone got in a circle and held the parachute. My little grandson got in the middle. Then we rolled and bounced him around. I was lucky to get any photos of this at all. They are not clear because he was moving and laughing so hard. I had to show you anyway. The four photos together gives you the wonderful, fun feeling that he was having. By the end, at the bottom right, he was laughing so hard that Daddy had to help him up. 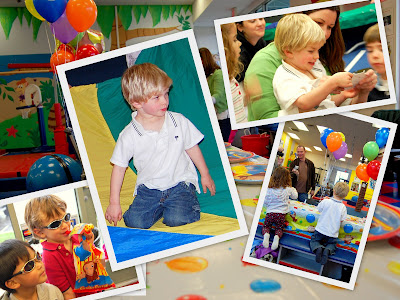 Clockwise from the upper left... This was just before he got tossed in the parachute. He's looking kind of serious because he's not sure what's going to happen. This is the look that lets me glimpse into the future..., when he's a teenager; serious, guarded and watching..., waiting to see what will happen next. No little bean, I want you to be the baby for a while longer. No growing up yet.
The upper right photo is him sitting with his Mommy opening presents. At three years of age this was a TASK and even though he looks like he's having fun here, two minutes later he was diving into a huge container of different colored rubber balls. Children are not very good at being "politically correct".
We ate sandwiches, apple juice and cake which he did sit still long enough to eat and it gave us a few moments to get some clear shots with our cameras. In the last picture(bottom left) is Mr. Cool (aka; The Bean, Big Bro, Silly Face) and one of his friends. The Curious George take home bag had these great, dark glasses inside and these little gentlemen thought that they were the epitome of coolness.

It was a Curious George birthday for my little monkey and a good time was had by all.