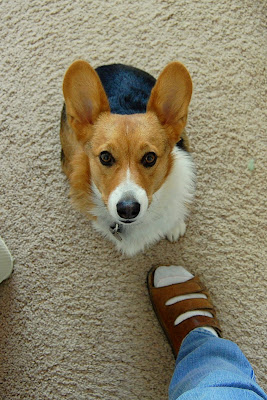 "Carl, I need to tell you something. This is the time of the year when the Tarantulas start moving around outside. It's a big spider that's searching for a mate and you will see them walking around everywhere. I don't want you to touch them or try to bite them. You be a good boy and stay away from them. No barking at them, either, because they won't hurt us and we don't want to bother them while they look for a mate." 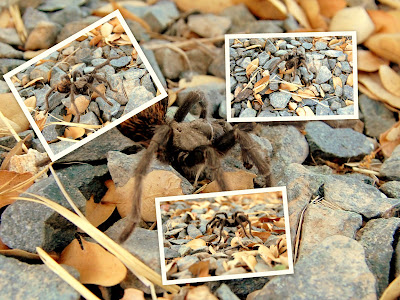 And they have come...., like an army of creepy crawlers, looking for love.
This is a variety of the Desert Tarantula. There are over 30 species found in the southern U.S. and up to the dry foothills of California. The female lives up to 20 years because she stays mostly under ground only coming out to grab some unsuspecting mouse that walks by the burrow. The poor male, for all his efforts, doesn't live long. He wanders around searching for a mate from sunset until dawn, then hides during the day.
This one was in front of the goat house last night when I went out to give the goats some dinner. It rained two nights ago and it's been very cold. This change in the weather always seems to bring them out.
Annibel (our cat) and I noticed him at the same time. I had to shoo her away and then I ran into the house to get my camera. When I came back Anni' had gone off to terrorize the chickens. She didn't even seem that interested. Maybe she has had this confrontation before. It's like she knew to leave it alone.
I have to tell you that I'm arachnophobic and if this big fellow greeted me in my house somewhere I would probably have a heart attack. But, outside, and for some reason as big as they are, I find myself more interested than fearful. This spider has one aim in life and it's not to bite me. He's just looking for a female Tarantula and he is very one minded about it. He has purpose. He's in far greater danger from a hawk, turkey or a fox around here. I think that he would crawl right over my hand and keep going if I stuck it in front of him but...., that is NEVER going to happen. He may be furry, like Carl, but he's still a SPIDER.
I actually have to say that I like this guy. I kind of feel sorry for him..., being driven by all those instincts and male urges. I hope he finds what he's looking for. 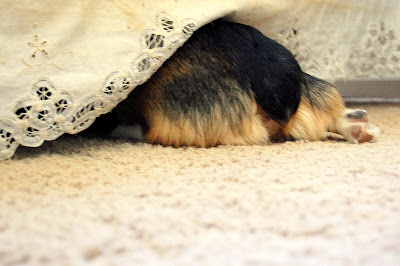 When I finished my chores and went back into the house, THIS is what greeted me......
"Carl! What's the matter boy? Why are you hiding? Those spiders can't get into the house. They will be gone, soon, anyway. Come on sweetie. Wanna biscuit?"
Carl didn't come out right away..., but he wagged his tail.
What Carl heard was, "Blah, blah, blah, blah, hiding? Blah, blah,blah..., biscuit?"
All of a sudden he was turning around and flying out from under the bed. It was not only "biscuit" time, but "dinner" time and "sit on the couch and snuggle" time too.

Oh, the joys of having a puppy.