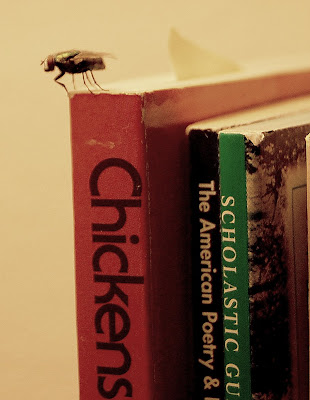 God in his wisdom made the fly
And then forgot to tell us why.


Last night a fly kept bothering me while I was on the computer and I remembered this poem by Ogden Nash. This was one of the first poems I ever learned. I always laugh when I think of it.
As I watched the fly sitting on the book in front of me, It appeared that it might be looking at me too and I remembered a Zen saying written about this small insect....
"Don't kill him!
the fly, it wrings it's hands,
it's feet." ~Issa~

And so..., as I am always in the habit of doing, I looked this creature up in the Insect book. It is a Blue Bottle Fly:Calliphora vomitoria (Oh my!) in the Blow Fly family. It might have been a female because they often enter open houses and buzz loudly when they can't find an exit.

I won't even tell you what they feed on. It would ruin your weekend.There are 8 to 10 generations a year; not exactly an endangered species. They don't live long but tend to reek havoc while alive and they can also transmit diseases.

So, as interesting as it was to have an encounter with this shiny, metallic nervous creature, I will still have a fly swatter handy inside the house. These are not your average "Don't kill them, they're harmless." insect. If it goes from carrion to my dinner table and carries diseases, it's a "persona non grata" in my book.