The Last Roses of Summer 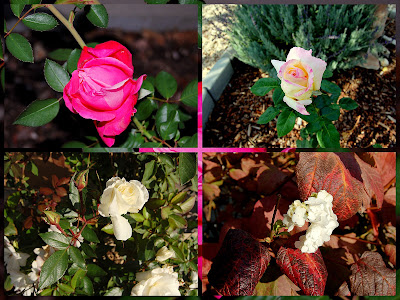 Only in California do the roses sometimes last through the end of the year. Well, maybe in Oregon on the coast or in the south. I've never been to any of the southern states, but here in California we have a lot of places where the cold is never cold enough and the snow rarely touches the ground.
These roses are still growing and blooming, even though it's November. Hey...., wait a minute! That photo on the bottom right is not a rose. It's Viburnum caprifoliaceae. Well now...., how did that happen? The leaves are turning their beautiful red and some of the leaves have fallen off already. What is it doing? It a gorgeous bush in the Fall because of it's color, but it's not suppose to be blooming.It's even got two very small, new, green leaves underneath the flower. Poor little flower, we had a couple of days of warm weather and it thought summer was here again. Can you imagine the effort that was made to produce that flower, when the plant was going dormant. You've got to give that bush credit. It's hard to keep up with the "roses" of this world. So, I think it deserves to be in this group picture. Too bad some of that monumental effort can't rub off on the "leaners" of this world, the ones who whine and complain and don't do anything to make things better. Maybe there is a little miracle going on here and there is a bigger meaning to this. I'm always amazed at the small things that happen in nature without an evident reason.

From now on I'm going to call this plant the "Obama" rose. It made a huge effort and it won it's place in the rose garden. Now we'll have to see if the effort makes a difference. I hope so.