Warming to the Evironment... and the Great Blue.

It was morning, and the new sun sparkled gold across the ripples of a gentle sea.”
Richard Bach, Jonathan Livingston Seagull

No one was on the pier yet. It was quiet... except for the birds, and water lapping on the shore. 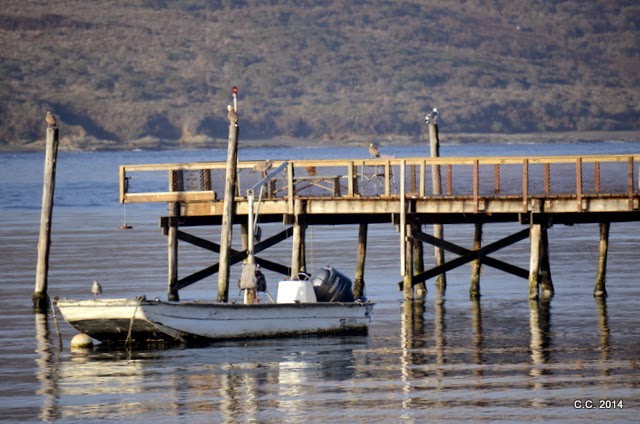 We slept well the first night. The sun rose on Tomales Bay and turned everything blue and gold. 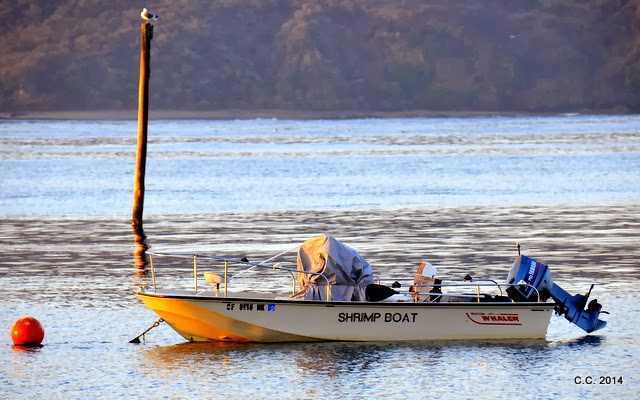 See the front of this boat? That's not yellow paint... that's the reflection of the sun.

'Bird with Twisted Foot' was waiting on the seawall and didn't move away when I came out to take some pictures. 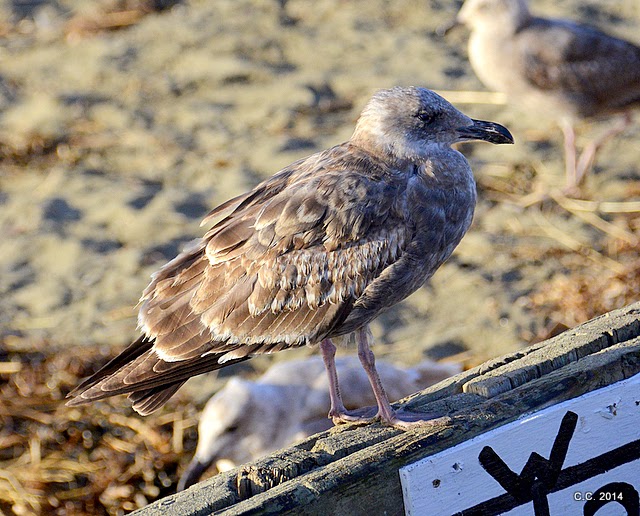 He was interacting with some of the other seagulls and didn't really give me any eye contact. just some side glances.
"Hello bird.", I said nonchalantly, and  then we had a short conversation. Well, it was kind of one sided and I will have to fill in his side of it for you. He spoke in little squeals and mewing sounds. I listened carefully and, like a language that you are just learning, not all of it was clear... but I caught the gist of what he was trying to say.
"My name is not Bird with Twisted Foot.", he started out, "but it's OK for you to use it if you want to."
"What is your name?", I asked.
"My name is Jon. I was named after my great, great, great, great grandfather."
"Seagulls do that, like people do?" I was surprised that this bird would have such a lineage.
"Well, yes. There are a lot of us. It would be confusing if we didn't have names." He looked straight at me. and said, "What's yours?"
"Oh... my name is... uh... Farmlady." I gave him my avatar name.
"No it's not! That's what someone does. That's not a name."
"Well, I don't like to give my real name to just anybody." What would you call me?", I said.
"Henrietta"
"What? Like a chicken? Do I look like a Henrietta?" I was unset that he didn't pick something pretty, like Casandra or Amelia... or Sophia." Why Henrietta?"
"I don't know. I just heard someone shouting that name here last week. It's as good as any."
"Well, Jon, I don't care for it, but if that's what you want to call me, I'm OK with it... I guess."
"You aren't related to Jonathan Livingston Seagull, are you?" I was kind of joking, but he listened and replied.
"I don't know. Is he a famous seagull?  I remember my mother telling me about one of us who flew, not to just get food, but to see how high he could fly. I wanted to try and sometimes I would fly way up, as high as I could, just to see what would happen.  Mom would get angry and talk about recessive genes. I don't do this anymore. I'm too old now and...", he hesitated, "A few years back I had an accident."
"Oh, no.", I said, "What happen?"
He looked out toward the dock that extended into the bay and sighed,
"Well, Henrietta, I got tangled in some fishing line. It was awful. I flew into a fisherman's line and ... well, I don't remember very much after that, I was in kind of a panic. The line got wrapped around my legs and it was tight and I couldn't get it off. A day later this human found me on the beach and cut the string off. I will never forget the kindness and how he kept telling me that it would be OK. I probably wouldn't be able to walk if he hadn't cut the line off of me... or be dead. My leg is crooked and it doesn't work very well but I still have it. That's something to be thankful for. I don't go out near the dock anymore. I try to stay here where it's safer."
"But", he looked up, "I still like to fly. It feels so good to fly up into the air and look down on everything. It's kind of magic. I love to fly. I go out where there is no fishing and nothing to get tangle up in and I can still fly quite high."
I listened to Jon and thought about what it must be like to be a bird. What it must be like to fly, to have wings and be able to leave this earth and hover over it. To have control over your own flight into the air... and to be trapped and tangled in fishing line. What an experience it would be.
"I'm sorry that happen to you, Jon.".
"Thanks. Being near humans is kind of a mixed bag. They seem kind and helpful. They give us food... but, then things like that happen and we wonder what their intentions really are. I guess everything we do comes with consequences. It's just life."
Then, without another word... Jon flew away.

I took more pictures, sitting on the outdoor table and watched the sun come up into the hazy, cloudless day. Later in the day the clouds would build and making interesting patterns in the sky, but right now the sun made its presence known.There was no warmth yet, but Oh... the color of everything... golden... and shiny.
I spotted a Great Blue Heron and a Cormorant on the old pier posts out in the bay. They were enjoying  the early morning sun. 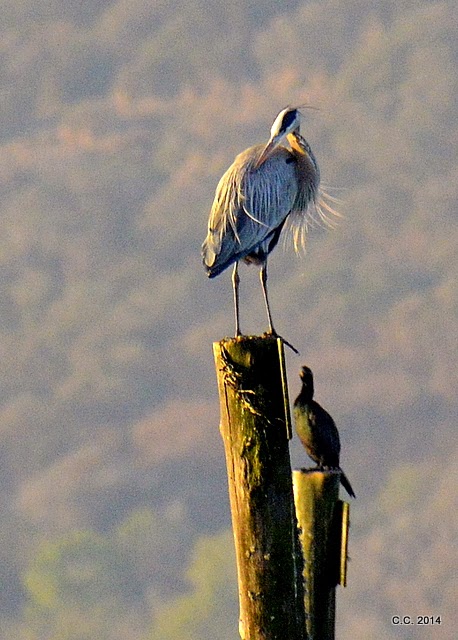 The Heron was really beautiful. I was wishing that I had a longer lens on my camera.  There is a lot of "noise" in these photos because of the distance and cropping, not having a tripod... and other things that would be  too boring if I tried to explain. Suffice it to say, I was lucky they came out this good.
I was delighted to see this bird, this amazingly beautiful bird, sharing space with a common Cormorant.  They both seemed to be in their element. Each so different but living together in one place, sharing the fishing, accepting the environment that was theirs. 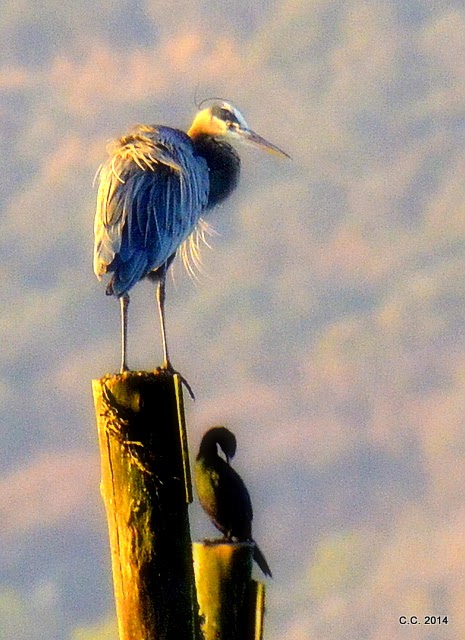 My tripod was in the RV but I was afraid that the birds would fly away. Didn't happen. This Heron was still on this pier post, later in the day, when I took a picture of The Prospector and the dogs on the fishing pier. 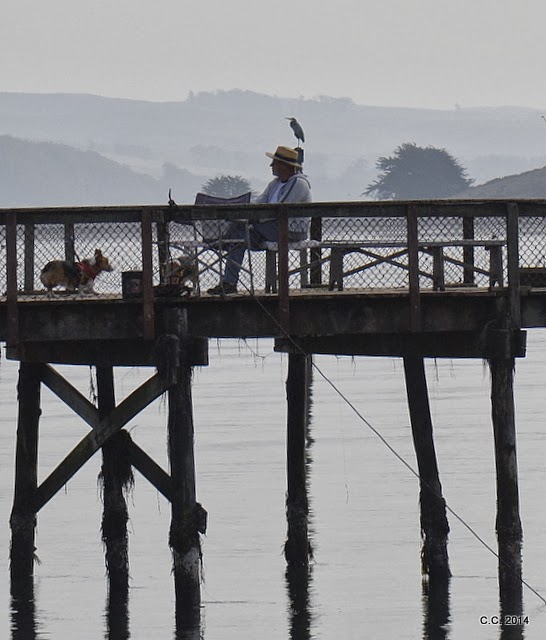 That is the Great Blue, on the post above the Prospector's head. It was there most of the day. I still didn't use the tripod. I have no excuse.
I finally cropped this bird as close as I could. 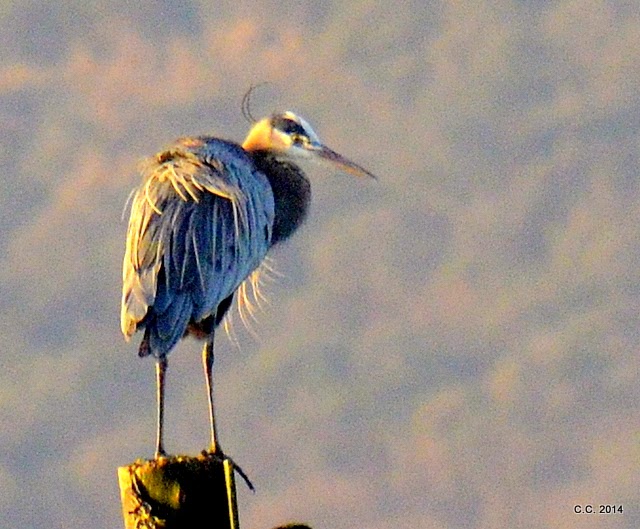 They suffer from over processing and look more like paintings than photos but the essence is there. 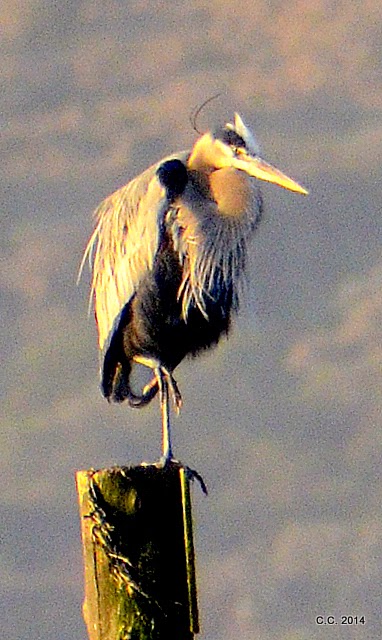 This is a stunning bird.This is one of those moments that transcends lazy and inept camera skills. I was happy to see this amazingly beautiful bird, sharing space with the rather common Cormorant. They both seemed to be in their element. Each so different but living together in one place, sharing the fishing, accepting the environment that was theirs. 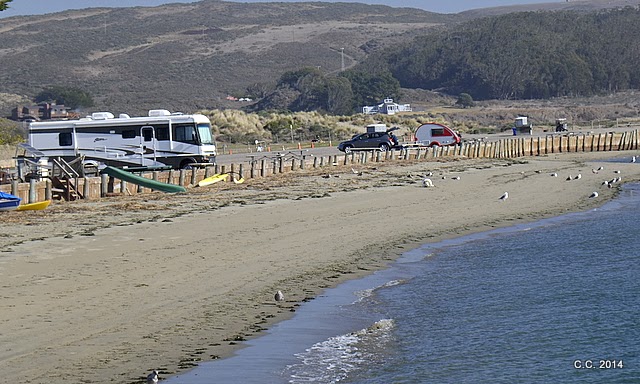 Oh, look... there was another trailer moving in.  A small teardrop trailer was pulling into a space. As we watched from the pier, the spaces slowly started filling in. We wouldn't be alone tonight.

By the next morning, this was how we looked. People, activity, kids yelling and dogs barking... 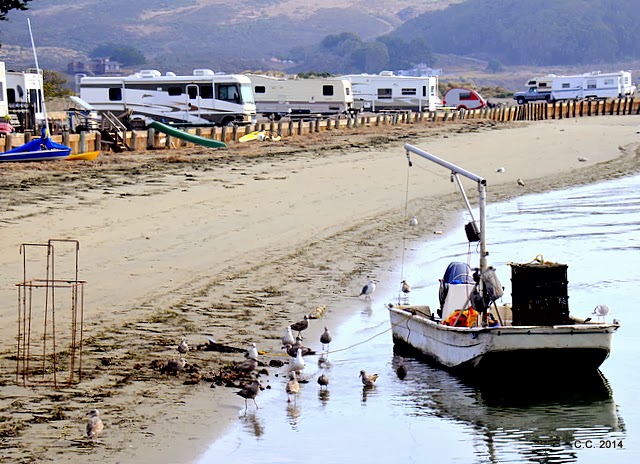 A day later, the campgrounds filled and I began to feel more comfortable in this community of temporary living. I was warming to Lawson's Landing. 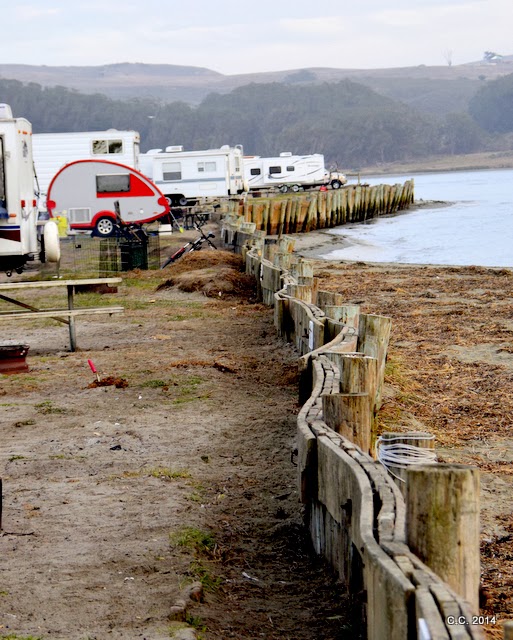 This place didn't seem so bleak. I was settling in. 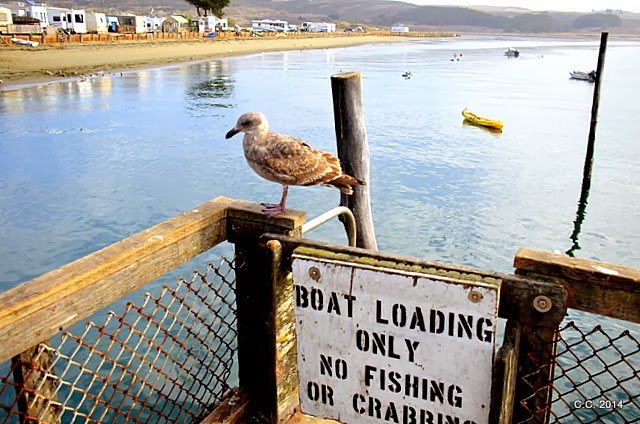 That's not Jon, above. There are lots of Western Gulls. Some look very similar. This was one of many, who  hang around the pier and wait for a piece of dropped bait. They were everywhere.
Carl was not happy about these birds being so close to him. He barked at all of them. It was hard on a small corgi.
He had to rest a lot in the RV. 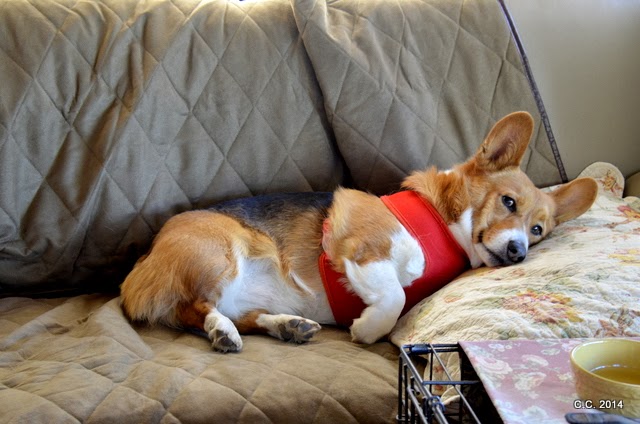 Look at this. Poor, tired Carl.
He didn't have control of the situation. It was taking its toll.
And then... there were the CRABS.