The smoke was gone on Wednesday, but a whole day without electricity lay ahead. Some work was being done on our road and PG & E had to shut down the electric grid for most of the day. So we decided to drive up to Silver Lake in the Sierra's.
We took a lunch, the Corgi boys and off we drove . As we climbed in elevation it was evident that the smoke that plagued us early in the week was still there. It just hadn't come down into the valley and was sitting along the crest of the Sierras.
We finally pulled into the Kit Carson Resort to find that there were no public bathrooms open and that we would have to go back out to the highway to find one.
We parked and let the dogs out. They had a great time running around smelling the bear scents around the bear proof trash containers. We walked down to the lake. It was smoky to the west but looking toward the east we could see a mix of thunderheads and blue sky. 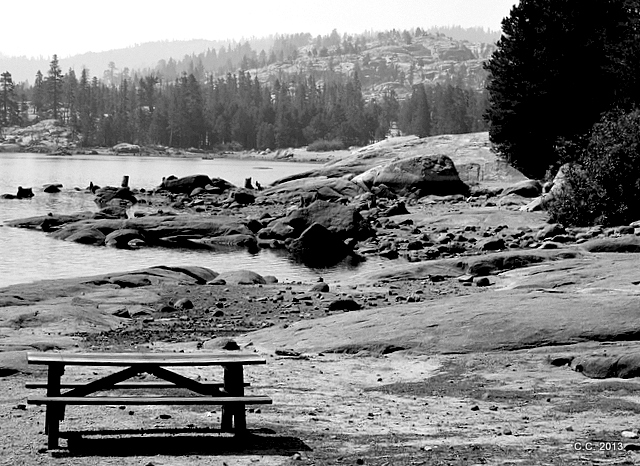 All I could smell was smoke. No Pine trees or clear mountain fragrances.
We continued back into the Silver Lake Campground and around the backside of the lake. We were looking for our neighbor, who was there for the day of fishing with a friend. We found our neighbor's car and walked along the beach until we found them.
Carl and Cutter were so surprised to see "D". They couldn't figure out why he was here and not at home but they were very excited to see him.
He and his friend from the Bay Area had already caught 10 fish ,but they were releasing most of them. 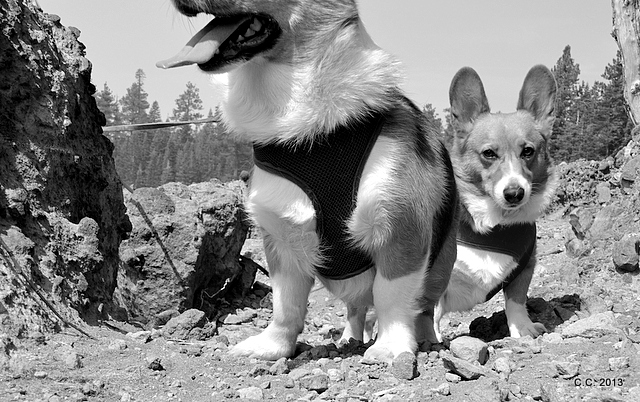 The smoke was heavy but it was still rather pretty at the water's edge. Lots of old pieces of wood and trees along the beach. The lake was quiet. There weren't many people around. Most of the cabins were closed up for the season. 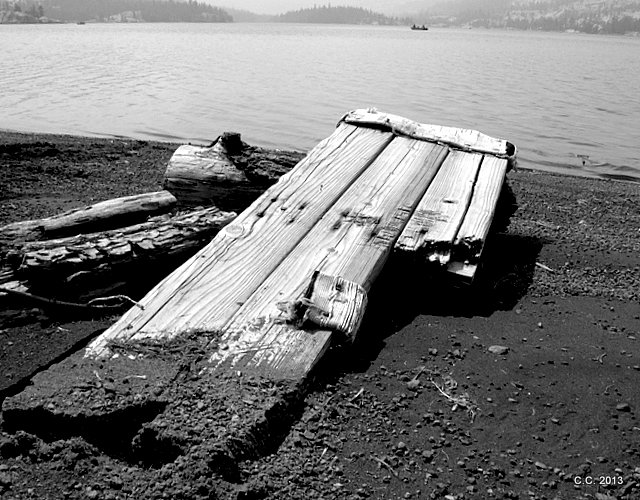 We said goodbye and walked back to the car. On the walk back down the beach I took this shot looking west. The big cumulus clouds were beautiful. Some were still forming from the Rim Fire near Yosemite but there were so many more and some were filled with rain. I think they will bring rain to the mountains this week. That would be wonderful! 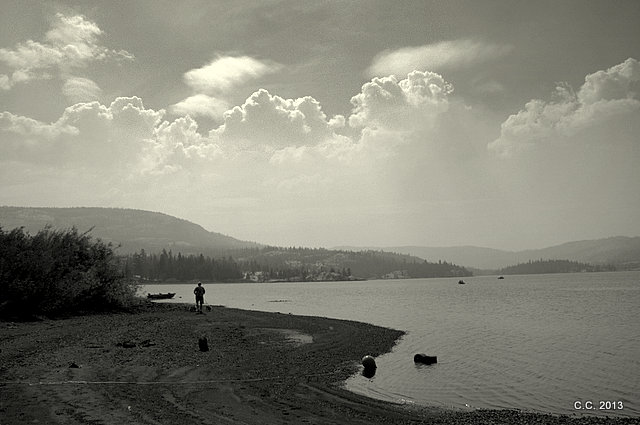 We drove back out to the highway. We had decided to go on up to Hope Valley and check out some campsites up there too.

As we drove past one of the big boulders that fill the Silver Lake campground... there he was.
The official Camp Host. 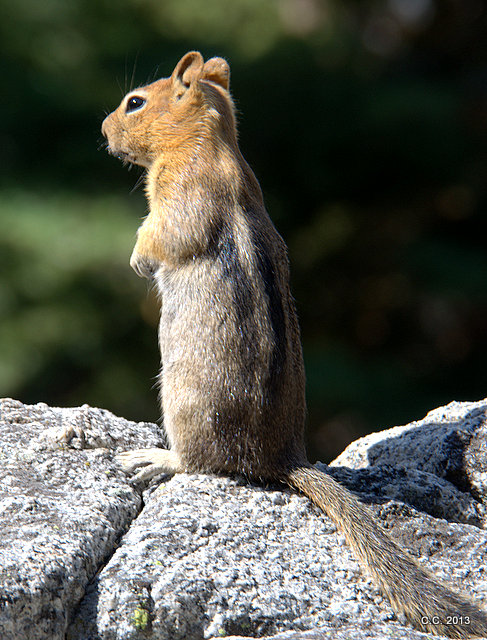 A cute little chipmunk. He stood there as if he was a very important Chipmunk  and didn't seem too concerned that I was taking pictures of him. I'm pretty sure that he, or she, was an "alpha" chipmunk. There was a "don't mess with me." attitude. I felt lucky to get such a good picture of it. Usually they are running across the roads in hyper drive and you cannot shoot them clearly.
We drove by Kirkwood, where I first learned to ski, up thorough Carson Spur and over the pass. It's not as scary as it is in the Winter, when the snow is piled on the cliffs. I always hold my breath when I drive through the "spur". It's an avalanche area. This time of year there is no snow to avalanche but there are huge boulders that can tumble down... at any time.
We drove east toward beautiful Caples Lake... 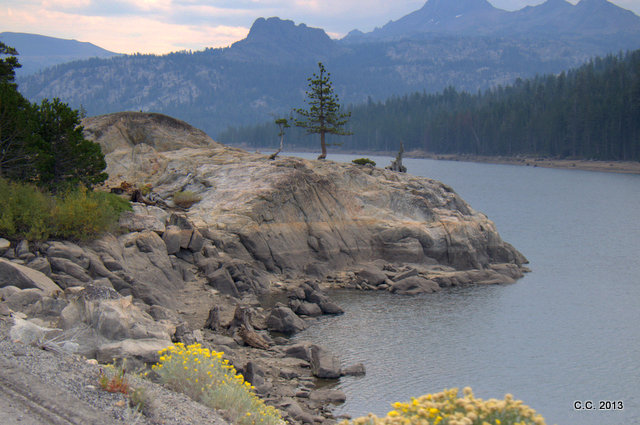 then over the pass (8,574 ft) and down past the smaller Red Lake, where I learned to ice fish and also learned that frozen lakes make sounds as you walk about on them. 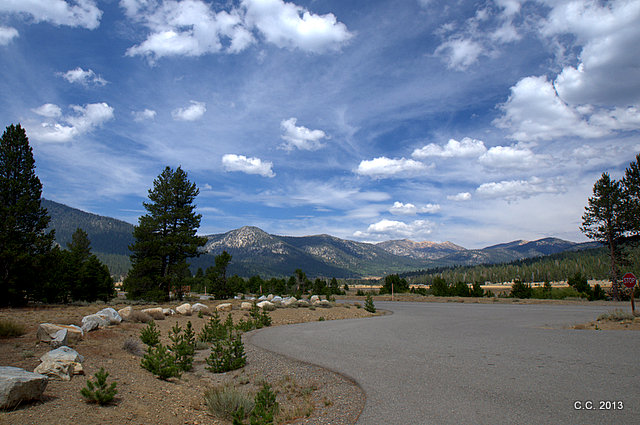 Where we ate lunch and just sat looking at the blue sky and the wonderful clouds. 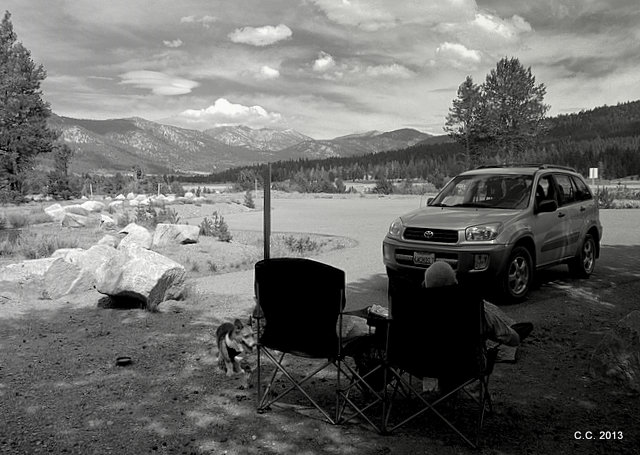 After lunch we drove into the Hope Valley Campground. There were actually wildflowers still blooming on the side of the road. 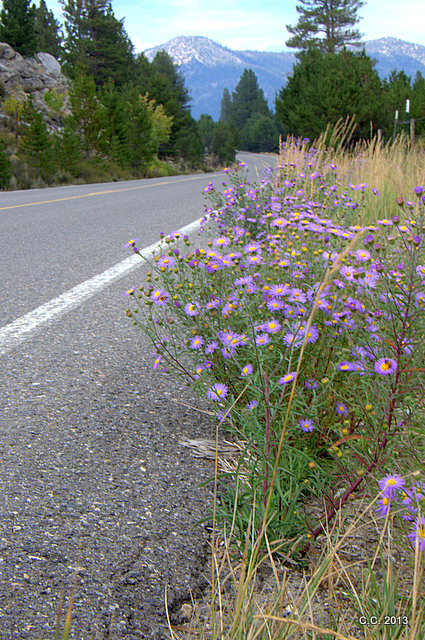 And birds that I haven't seen before. 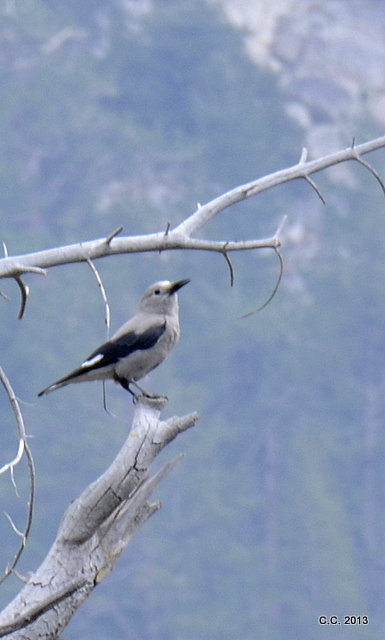 And the beautiful Carson River running through it all. 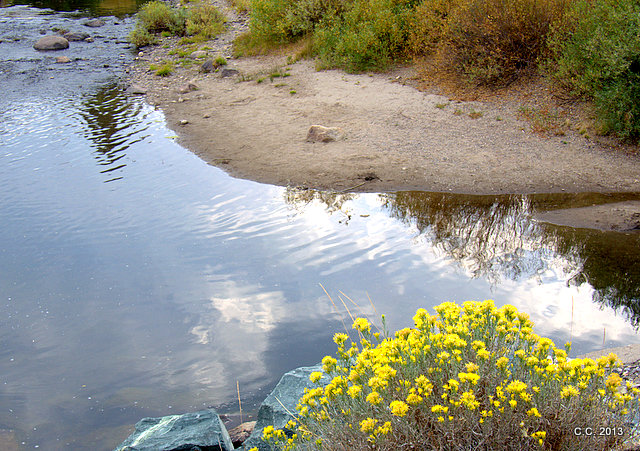 And, in the middle of all this beauty, a new season... changing color. A brilliance reflected in the river, a bright blush of orange, red and brown in the meadows, where the sky and air whisper "Winter's coming. Do you feel it?"
We filled our hearts with the beauty of the mountains and then, as all good things cannot last forever, we said goodbye to the valley called Hope. 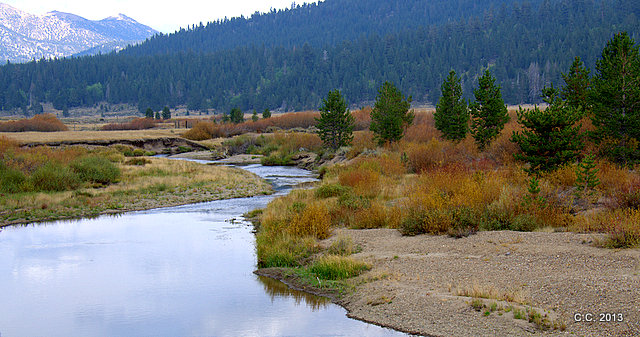 To the rivers that run east instead of west and how they seems to meander equal to the land. No canyons, no rapids and dangerous pools, dropping into gorges... like an angry river of no return.
This river... here... is a quiet, zen like river that is at one with its surroundings.
A lesson not lost on me. A lesson I must learn.
It's good to find a place that settles you down, makes you pay attention in its own quiet way... and gives you... well...  hope.