"Out of this nettle, danger, we pluck this flower, safety" ~ Shakespeare~

Yesterday, I got up early, drank my coffee and downed some Cheerios. I chose a pair of rubber gloves and a long sleeved shirt, and walked down to the vegetable garden... ready for the job at hand. 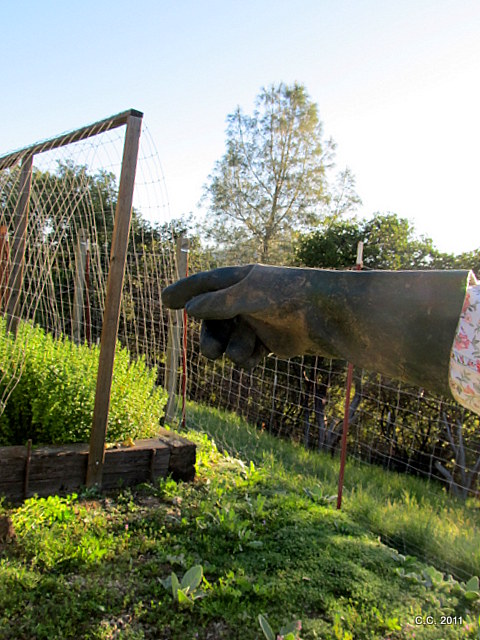 There, as the morning light filtered through the oak trees and into the garden, was my nemesis... The Stinging Nettle of Shakespearean proportions.
I carefully started pulling the plant out by its roots. 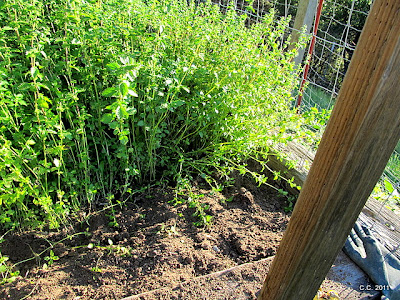 Then I heard the muffled steps of the goats behind me. Brownie and Murph' had come to see what I was doing, which translates to "What do you have for us to eat?" 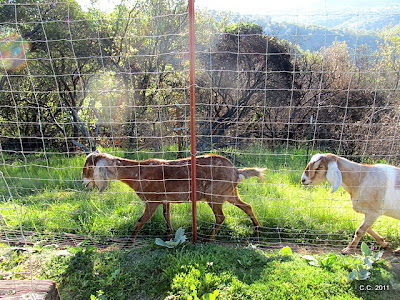 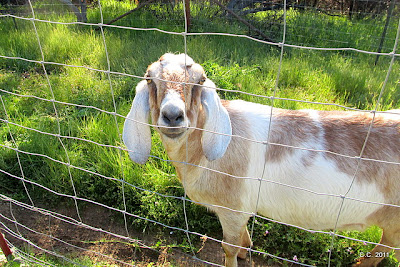 Hi, Murphy. How are you this morning?" I took a glove off, walked over to the fence and gave my wonderful goat a head rub.
In return, he gave me a goat kiss. That's my hat at the top of the picture. 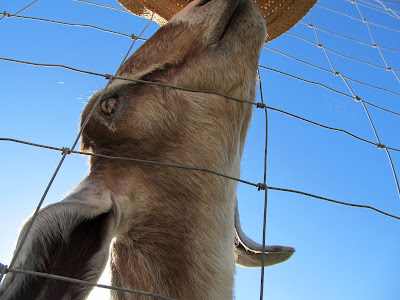 There is nothing like a goat kiss in the morning.
Then I gave him a back rub. He loves to have his spine rubbed. 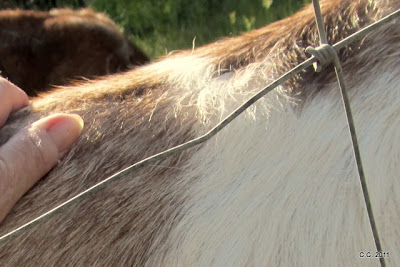 Brownie couldn't be bothered with all of this. He was chomping on all the wonderful grass and wildflowers in the pasture.
I threw a handful of nettle over the fence to them. They both ran toward it and then... turned their noses up at it.
They like the sweet grass with flowers. They love Lupine and the Dandelions. I guess even goats are particular if they have a choice.
I decided that I better stop playing around with the goats and get to the task at hand. It was going to be a hot day, again, and I was wasting the cool morning away with goat play.
Within a half hour, I had cleared the whole bed. It didn't take long. The soil was soft and the nettle came out easily. 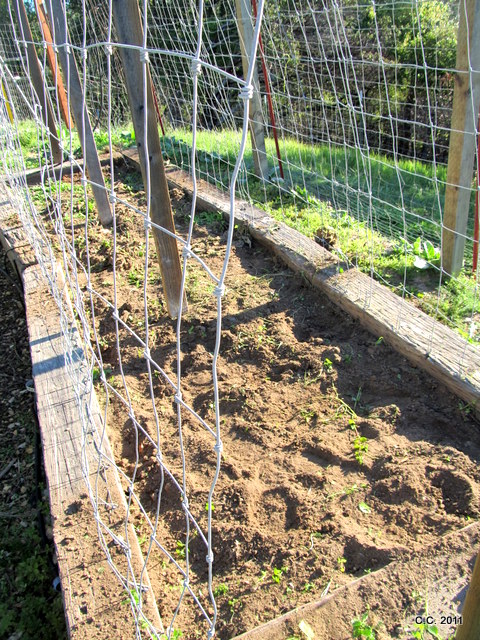 After pulling the long pieces out, I raked the surface and got all the left over roots and dead mullein out of the soil. We will add more soil to the bed before I plant the pumpkins. Then we will use Preen and mulch to keep the weeds down.
The Prospector came into the garden with the ladder and un-stapled some of the wire so that it would be easier to get into the pumpkins for watering and weeding etc. I left one section just in case I decide to plant some beans.
Of course, Murph' had to check this out too. 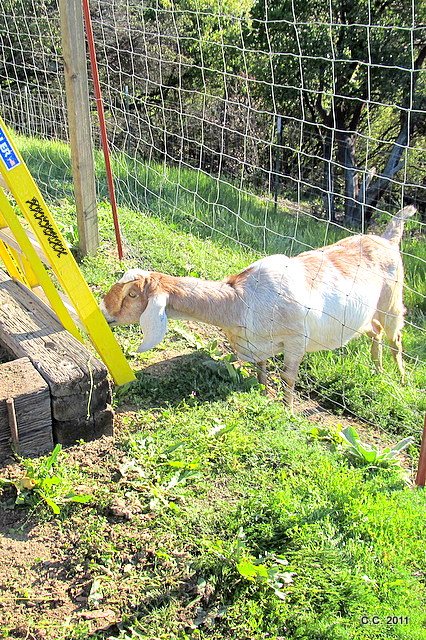 Can you believe that goat reached through the fence this far? It's the reason why we keep the beds away from the fence. This is why we double fence in some areas. He is amazing... and he never gets his ears stuck.
My magical goat is a force to be reckoned with.
Brownie, on the other hand, gets stuck every time. It's the horn. The only long horn that he has now. If he tries to pull a maneuver like Murphy, we have to go out and help him get unstuck. We have even had to cut the fence to get him untangled... and he cries like a baby. Oh, Brownie boy, it's a good thing that you live with folks that love you and understand you.
Some goats just need more attention than others. Brownie is one of the needy ones in this life... but, we love him. He is ours, horn or no horn, needy or not.
Before it got too hot I did some pruning and planted the new gold trough that we won at auction. I will take some pictures of the finished planter next time... and of the beautiful Tiger Swallowtail butterfly that came into the front garden this morning. That's the butterfly on my new header. What a beauty.

The Nettle is gone. It's everywhere else in the garden but it's gone in one raised bed... for now.
This site on Stinging Nettle says that we must have "highly fertile" soil because the Nettle does so well. Wonderful!! ( Can you hear the sarcasm?)
Lets hope that the pumpkins flourish as well as the weeds have.
My sister is coming in a few hours. I'm looking forward to her visit. Maybe we'll make some bread pudding while she's here. It's kind of a tradition.

Oh, and Happy Earth Day!
Posted by farmlady at 1:28 PM