What does all of this mean? 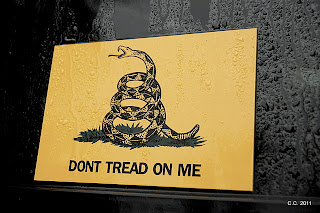 The Gadsden flag , coiled and ready to strike, on the back of The Prospector's truck is a symbol. It's fiercely American but provocative. 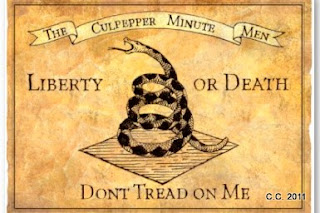 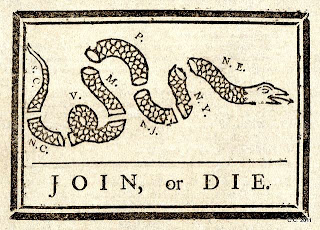 The Rattlesnake as a symbol has been around for a while. It was a symbol for the colonies when our country was fighting in the American Revolution.
I don't think the symbolism of this threatening snake has disappeared, but I don't know who the snake is anymore.

I watched and listened to the news this morning and it made me wonder what is really going on. A group of Occupy "revolutionaries" in Oakland , California were protesting again, and this time my reaction was different. It made me angry.
I'm not sure what it is they are doing. I'm not sure what they want besides chaos, anarchy and the ruin of a good American city. They don't state their case as a whole. They don't have a focused protest, that I can see, except to destroy downtown Oakland.

Here is some of what happen...
OAKLAND (AP) – About 300 people were arrested Saturday during a chaotic day of Occupy protests that saw demonstrators break into City Hall and burn an American flag, as police earlier fired tear gas and bean bags to disperse hundreds of people after some threw rocks and bottles and tore down fencing outside a nearby convention center.
""These demonstrators stated their intention was to provoke officers and engage in illegal activity and that's exactly what has occurred today,"

Police said they issued a dispersal order and used smoke and tear gas after some protesters pelted them with bottles, rocks, burning flares and other objects.
The number of demonstrators swelled as the day wore on, with afternoon estimates ranging from about 1,000 to 2,000 people.
A majority of the arrests came after police took scores of protesters into custody as they marched through the city's downtown, with some entering a YMCA building

AND THEN....Michael Davis, who is originally from Ohio and was in the Occupy movement in Cincinnati, said "Saturday was a very hectic day that originally started off calm but escalated when police began using "flash bangs, tear gas, smoke grenades and bean bags."
"It was very emotional. I thought it was a very good day for the movement because it brought us back together," Davis said. "We all were here in spirit and everybody actually helped everyone today."
"What could've been handled differently is the way the Oakland police came at us," Davis said. "We were peaceful."
( Thanks to USA Today for the info. The whole article is at: www.usatoday.com/news/nation/story/2012-01-28/occupy-oakland-protests/52852280/1 )
A VERY GOOD DAY FOR THE MOVEMENT?
I can't figure out who the "rattlesnakes" are here.
I think that I will stay right here on the mountain and deal with the rattlers that come and go,  usually one at a time. They are pretty specific about their motives... food, water, survival. They were here first and I respect and understand that. I think I'm a rather intelligent person that lives a fairly mobile and productive life.
I understand that there are folks out there that are angry and feel that their lives are unequal, unjust, unfair, inaudible and incurable, but is this kind of protest the answer? Who is provoking who?
Mahatma Gandhi said, "Be the change you want to see in the world".
Is this the change that some folks really want? Is this really "non-violent" protest? Is this the protesters "means to an end" and is it a valid one? I don't think I'm seeing the true picture here?
I'm trying to see this whole event in the right light.  I'm trying not to say all the trite things about this, like so many others...
"Why don't they get a job.",
"They are just professional dissenters." and
"If they don't like this country... leave."
...the easy and unintelligent answers to a growing unrest.
I'm reminded of Metallica's lyrics...
"... Liberty or death, what we so proudly hail,
Once you provoke her, rattling on her tail."
I wonder if anyone knows what they're doing.
I need to take a walk and think on this... here, right now, the rattlesnakes are sleeping for the winter.