Before I write this post I want to send some good wishes and strength to all the folks on the east coast that just went through that horrible hurricane.
The flooding, the swollen rivers, the damage that was done... What we are seeing on TV is awful.
Mother Nature sure went on a rampage for a few days.
I wish all of you well and hope the electricity comes on soon.
******************************


Do you ever get up early just so you can be up when the sun rises? I did this morning.
It's been so hot everyday here and I wanted to clean out some planters and put bedding plants in for Fall.
So I had planned on getting up early. We let the dogs out of their crates and they played on the bed with us for a while.
You've got to love retirement.
The Prospector got up and made coffee.
Gotta have that coffee.
It's one of my guilty pleasures.
It was a beautiful California Foothill morning.... 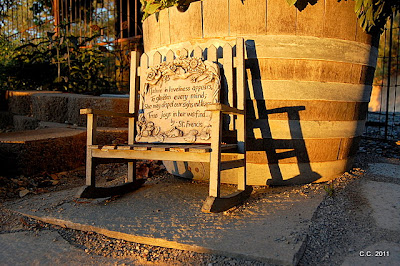 Earlier, I heard the coyote yipping and howling across the canyon and, because we sleep under a low window toward the east.
I could still see stars and the little dipper in the southeastern sky.
I've always wondered about the stars.
When I was a kid, I use to look up into that vast endless space and wonder if it wasn't really a ceiling...some kind of  huge dome and we were really on the inside. As a child, this made me feel more secure to think that we were surrounded by a beautiful protective dome.
This morning the stars slowly disappeared and the world took on a glow. Oh how I love to see this happen. It's like the day is beginning again and all things are possible.

The first cup of coffee is ritually drunk on the couch with a dog on each side of me.
The second cup usually moves out to the front yard.
The dogs look ( and smell) for anything that might have trespassed during the night. They do their business and them they want to be fed, so we all come back in for breakfast.
The Prospector had plans to help our neighbor pick something up in town at his aunt's house, so we ate a quick breakfast and I returned to the yard to plant flowers. The dogs followed me.
Carl went berserk at the fence and I realized that a young buck was standing outside the fence looking at Carl.
The buck looked at me as if to say, "That little dog needs to chill out or I'm going to kick his A$$."
The buck just stood there, watched us for a while and then moved on down the road. Carl settled down.

A wild turkey mom and two of her babies were drinking at the water bucket. 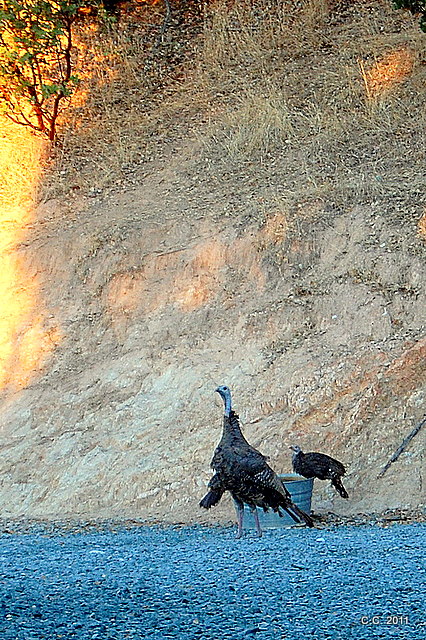 We always keep water out for the wild animals in the summer. It's so dry and hot. We fill it every day.
The turkey don't seem to elicit the same reaction from Carl as the deer. I think Carl and Cutter are  intimidated by the size of the deer so they act tough to compensate.
The turkey are like our chickens... they even hang around together.  The dogs will bark at them if they come too close to the fence.
Crazy dogs.... they want to herd and control everything.
So, the rest of the morning was spent planting, pulling some weeds and watering. It was delightful.

The Prospector came back and went to work on the the potting shed.
He's putting the roof on this week. 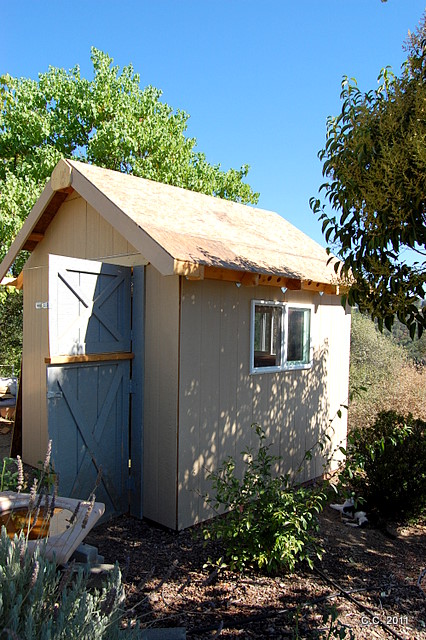 When I was wet behind the ears (as my Dad used to say) and just married. I worked for a hardware store. It was called Kelleway Hardware in Walnut Creek, CA. I managed the housewares dept. and worked the cash register. It was really fun.
Oh, what a long time ago that was. I wore mini shirts and pantyhose.... and an apron.... and I knew what  roof sheeting clips were and where they were in the store. I knew the size of nails and how to cut glass.
I loved that store and the guys that worked there.
We would party on Saturday nights, get up and go to work on Sunday... hungover or not.
Seems like a million years ago.
How life moves... like a river. Yes it does...

So the little shed is getting a roof. 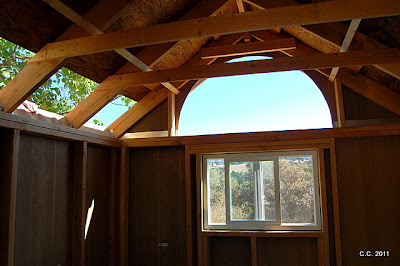 and then we will start the finishing work.

My early morning planting made the wine barrels look nice, I think. 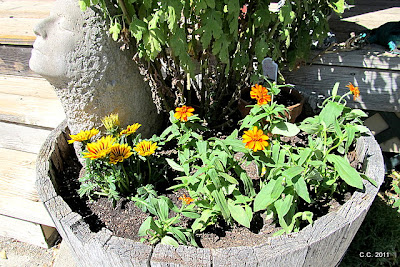 and the color is ready for Fall... 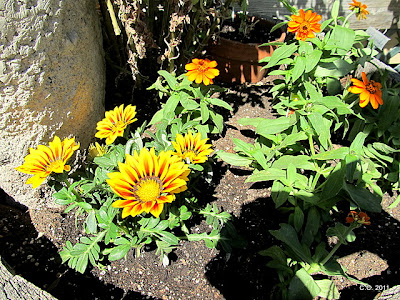 for pumpkins on the porch...
and leaves falling...
For cold weather... and Halloween.
I'm waiting...
The last of the butterfly bush blooms are in a vase . 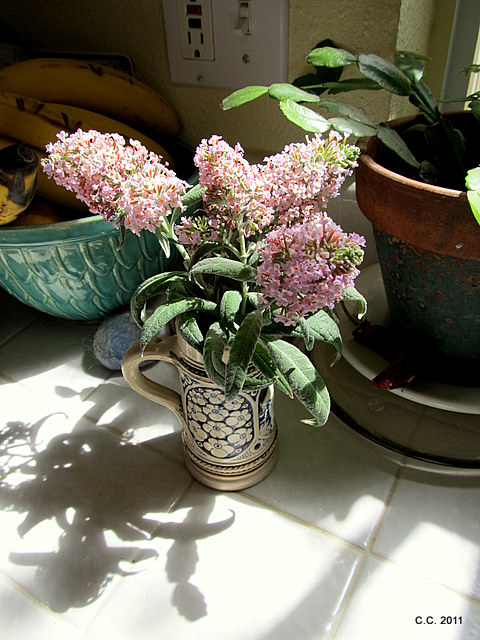 The fragrance is so wonderful, so Summer, but I'm ready to say goodbye to the heat and the dryness.
I'm waiting for the stillness and cold of Winter.