Yes, there is a small problem in the garden. For some reason, Carl, our older Corgi, has discovered that Strawberries are delicious little morsels that magically appear on some plants and now he is rooting for them everywhere, like a little Javalina... only he's smarter than the average pig... and he's sly. 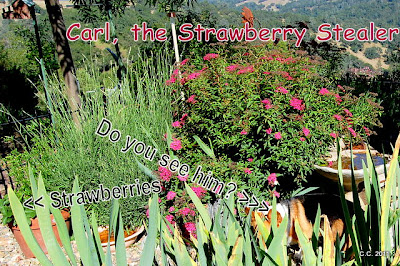 If you click on the photo above, you will see him PRETENDING he is just cruising around looking for a bug or a leaf. He acts like he's not interested in much of anything but this is just a ploy... He's really heading for THE STRAWBERRY PLANT.
It's the same routine everyday. He has mastered the fine art of deception. 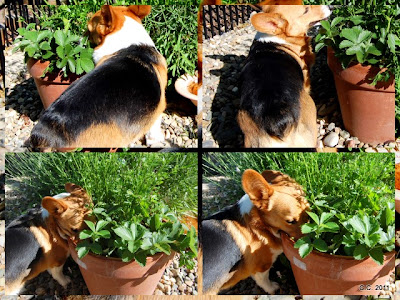 He, nonchalantly, walks over to the pot with the strawberry plants. He sniffs the leaves. He checks to see if anyone is watching.... and then.. in goes the nose. He roots around, finds a strawberry and runs with the stolen goods. Lately, he hasn't even been running away. He just eats the strawberry and sashays away like it's no big deal.
"Hey, little man. Where are you going. I want to talk to you. What's with eating my strawberries?" 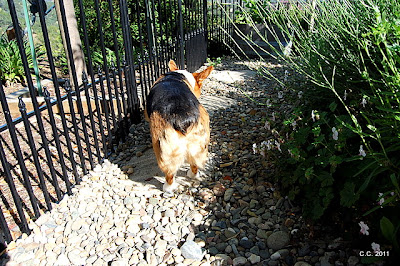 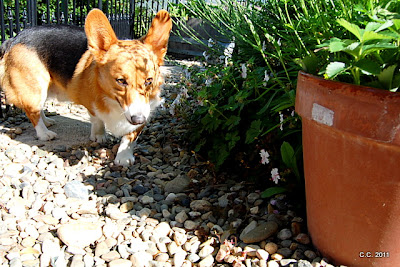 Look at that expression. He is looking at the Strawberries.
"I hope Farmlady didn't see me eat those a minute ago. If I just walk past without stopping, maybe she won't notice that they are gone."
He walked right by them... 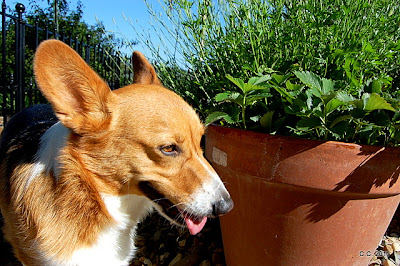 That must have taken a lot of self control, thought Farmlady. Then he walked around the container and got a drink of water. 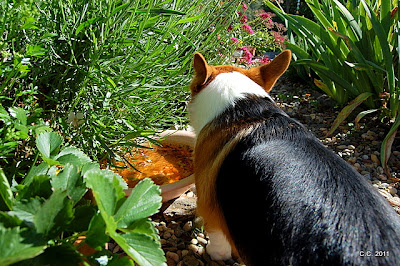 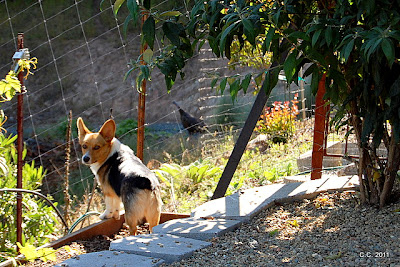 "Hi Carl. Wanna help me bark at those big birds?"
Carl wasn't too interested. HIS TUMMY WAS FULL!
"No cutter. I just ate the last of the strawberries that Farmlady was going to eat. I'm trying to act like I didn't do it."
"Oh. Strawberries? Where?" as he forgets about the Turkey... 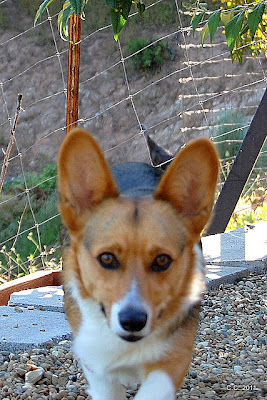 "I want some strawberries too!"
"It's too late. I ate them all" Carl says.
"YOU ATE THEM ALL?" Cutter ran over to Carl and sniffed Carl's mouth.
"Yes, I did."
"You're 'spose to share."
"It was a spur of the moment thing." said Carl, "You have to get them when you can. I can't be saving them for you Cut'. You're big now.You have to get your own."
Cutter looked at Carl and then he decided that this was more than he could take. After a day of going to the vets for shots in the morning and then having the turkey ignore his barks, he was not going to take this "dump on the puppy" stuff anymore. He walked slowly around Carl and then he jumped on Carl's back. They wrestled and ran around the yard until they were exhausted and then they both laid down on the porch and went to sleep.
. Farmlady decided that she would move the strawberries to another place outside the reach of Carl as she had done to another pot of strawberries. If she didn't, she would never have any ripe red strawberries because Carl had even taken to eating them before they turned red. He didn't care if they were unripe. He liked them even when they were white with a little pink on them.She moved the plant and started for the house. Carl and Cutter were laying on the porch.
Farmlady wondered, for a few minutes, about having dogs in her life. She decided that a few strawberries were a small price to pay for the joy of living with these two little Corgis and, as she walked into the house, she heard them both get up and follow her.
Later, after dinner, Farmlady thawed and sweetened some frozen peaches to put on ice cream. Fresh strawberries would have been lovely.... but, as Carl curled up in her lap, watching her eat and waited for the "licking of the ice cream bowl", she decided that life was much more about THIS DOG LYING IN HER LAP than not having fresh strawberries for dessert.  Life was about two little dogs that love their people, think the garden is theirs and sometimes take advantage.... but she wouldn't have it any other way.
Farmlady finished her ice cream, let Carl and Cutter share the little bit of ice cream that was left and curled up on the couch with one dog on each side of her.
She fell asleep  and dreamed about a lovely strawberry field, long and filled with thousands of red berries. She was there with two Corgis running ahead of her, They were jumping into the air and looking back at her as they ran. It was a beautiful dream.
Posted by farmlady at 3:34 PM