This California girl has just about had enough of this "Springtime" weather.
I'm tired of the wind, the rain, the thunder and lightening..... and three of my "billy goats gruff".
Gruff as in ... being really awful to Brownie.
Gruff as in... they are making Brownie miserable and they don't seem to care.
It's bad enough that he's lost his horn.... 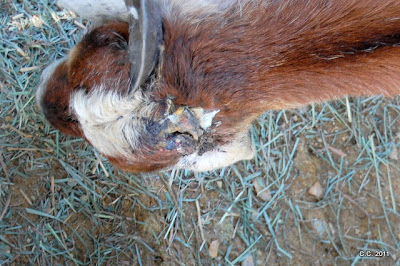 But now he's being ostracized. The other goats don't want  to be anywhere near him and when he tries to join them... they push him away. 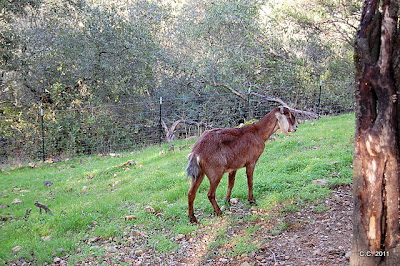 He a goat adrift... in a field of despair.
He's a goat alone in the world. Oh, Brownie. I'm so sorry this is happening.

I don't understand why the goats are rejecting him. He was always one of the pack. I think it has to do with him losing his horn. I don't know if they did it playing around, butting heads and pushing each other like they do. I think maybe they didn't like all the blood, or that the missing horn makes him different. I just don't know. Maybe they are rejecting the weakness. He had always been such a hard nose. Now he's acting very vulnerable.
The other day I got mad at Bart for pushing Brownie away from the fence while I was petting him and all I got from Bart was attitude. 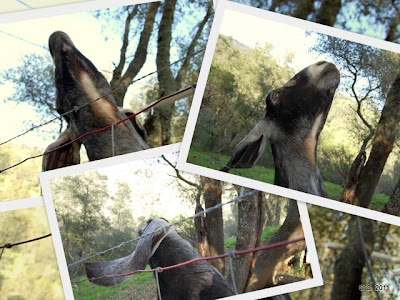 And after he stopped playing around trying to be.... "all that". 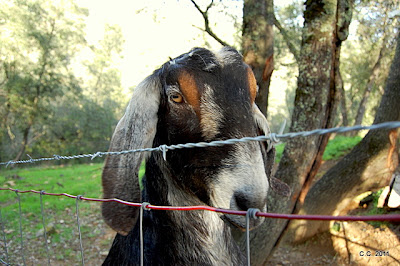 
This morning we are having a wind storm with lots of sideways rain. It's a really cold ( well, not cold like Michigan, Dawn.) rain. It's snowing in Pine Grove.  the news this morning said it's even snowing in Sonora. (1900 ft.)
The trees are swaying back and forth. One of those days when people should stay inside so I was downloading some pictures from my camera and I heard a cry from what I thought was Brownie.
I put my raincoat on. Ran out to the goat house and Brownie was on the other side of their house hunkering against the wall. The other goats were in the goat house.
I put my boots on, sloshed out to him and led him back into the enclosure.  I closed the gate so he couldn't leave again and told the other goats to behave themselves. They were guarding the doorway so Brown couldn't get in. They have been doing this for weeks now. This photo shows them a few days ago, ganging up on Brown because he had the audacity to go into the house. They went in and chased him out. 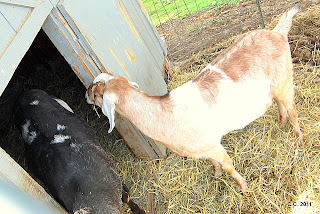 So, I realized that it wasn't Brown's bawling I heard from inside the house. His is more pathetic.
As I stood there, I heard it again and guess what?.... I walked out to the front driveway, looked up the road and what did I see? COWS above the chicken house. BIG BLACK COWS!!! We don't own any cows. The Prospector had gone into town. I'm here dealing with a rejected goat and, all of a sudden, a small herd of COWS appear. WHAT THE...!!
I ran up the road toward them yelling and shouting. They gave me that wide eyed stare that cows get when they are confronted or startled. Then they turned around (thank God) and walked back up the road. I'm so glad that they were being agreeable. They are very big animals. Wouldn't want to have one argue with me. They were much more cooperative than Brownie, who had to be sweet talked and pushed back though two fences and  into the goat house.
About a half hour later the Prospector came home. He went up and closed the big gate that we installed, half way up to the well, just for those occasions when cows decide to visit. He didn't see any cows. I must have made an impression on them. They were heading back to where ever they belonged. I'm sure that they were saying, as they walked away,  " Crazy woman! over there. We don't need to go down that road again."
***********************
Well, SH%*TE... now our Flowering Pear tree just lost a big limb and it's laying on the garage roof and back porch. I will return.....
***********************

And a couple of hours later...
I've been gone for a while. I needed to be out there to watch over my husband . He was up on a ladder and that's kind of scary in this wind. He has a bad knee. He was using a chain saw. I just wanted to be close by. 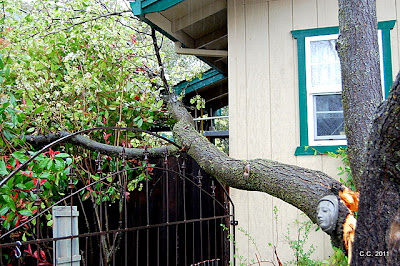 You had to be there. The wind blowing. The rain pelting down. The branch landed on our iron fence and then the wood fence. Thankfully the fences broke the heaviness of the huge branch and there was no damage to the back porch or the garage roof. The Prospector started cutting the heaviest part of the branch to relieve the weight on the fences. 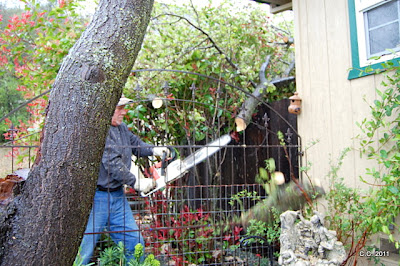 The photo is kind of blurry because of the rain and wind. Then the Prospector went around and cut some of the smaller branches away from the back porch. 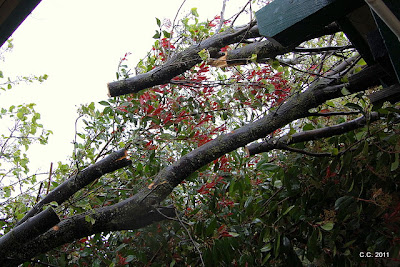 The trellis held up really well considering that it caught the top of the tree. 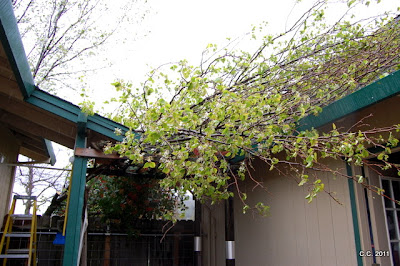 I'm guessing that the weakness from the other branch that fell last year is what weaken this one. It came from the same area on the tree. We may lose the whole tree now. I hope not. It's so much shade in the summer and it's such a beautiful tree.
The rest of the tree is moving back and forth. We are hoping that it doesn't fall over. The wind is so strong today. It's still blowing hard out there..... and the rain....  We are thankful for a sound home and that the electricity hasn't gone off..... knock on wood....
I didn't say that.... knock on wood...
Mother nature is sure having it her way this year. 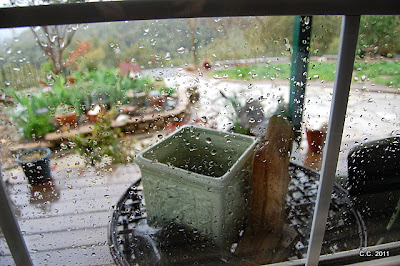 The rain is even hitting the window that's under the front porch.... What a day!
Posted by farmlady at 4:33 PM