Cutter Talks About Christmas and Other Things.... 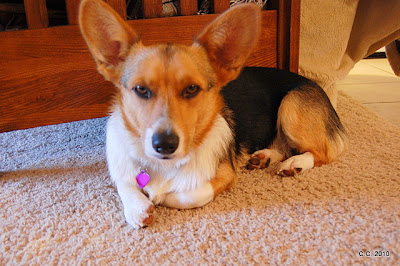 Merry Christmas! This is my first holiday dog post in my new "good" home. I'm a year old now and everything has been really great.... until Farmlady got sick. See these bags under my eyes. This is because I have to monitor all her activities.
At first it was fine because she was really sick and when she took her medicine all she did was sleep. Now she's feeling better and look at this mess.... 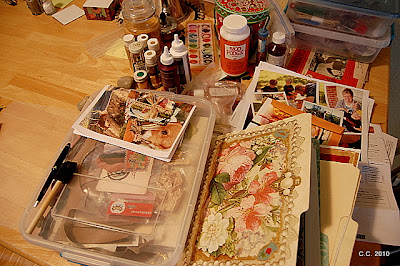 She sits at the dining table almost all day and makes Christmas cards and other stuff. There's glue and glitter everywhere. Glitter doesn't even taste good.

She took these pictures of cards that she made yesterday.... for some of her friends. I don't see one with my name on it. I have been trying to clean up after her and all I get is maybe a biscuit and a "Don't touch that, Cutter!". She makes a mess and then goes over to the couch and practices her knitting. She says this is called Ribbing. It looks like something good to chew on.... to me. 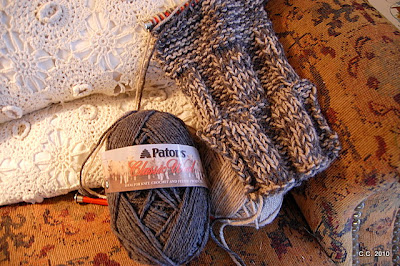 She gets all excited about this knitting. I've never seen her like something so much except when she takes Carl and I for a walk or when she's making cookies or cheese. By the way....walking has been slim lately and today it's all wet outside. I don't like this wet stuff. I just sit on the porch and watch for the cat, so I can bark at her. She must not like wet stuff either because I don't see her when it's wet out there.
Yesterday, Farmlady made something long with ribbons that I kept trying to grab. It has pictures on it  and more glitter. She says it's about "memories" of a trip to a place called Montana. She called it a GARLAND. 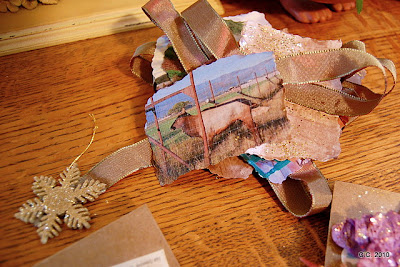 She told me that if I grabbed any of this she would put me on the porch for a while. It was all laid out on the ironing board and hanging over the edge... I just wanted to grab the sparkley thing on the end. Just because she's sick she doesn't have to be cranky.
The cards are nice. They have more sparkely stuff on them. 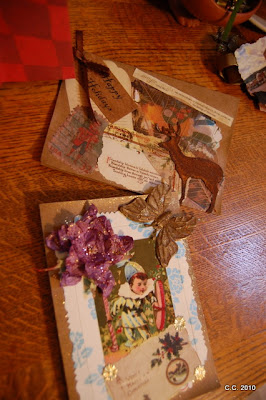 Farmlady seemed happy with them. She smiled at me and said she needed to do some more.
I think that she needs to lay down and rest so I can get in a little shut eye myself.... 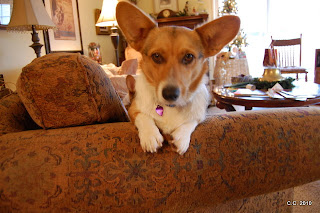 I let her have my bedroom since she's been sick. I've been sleeping in my crate in the other bedroom were she and the Prospector usually sleep. The coughing was keeping everyone awake so we traded. It's nice. It's a bigger room and because the Prospector sleeps with the window open, I can hear the Coyotes, at night, sometimes.


"Christmas is coming." That's what Farmlady says.... and then she always adds,  "with or without me."
I don't really understand it all but I think it's a good thing. We have a tree... in the house and there are lights outside with different colors. I like this at night. It's not so scary.
Farmlady has been in the kitchen more again and I heard her tell the Prospector that she's feeling better. She also said that she wishes her two sons would call her. That sounded like a little bit of sadness in her voice so I thought I would say it, here, just in case they are reading this.
I guess that's all I have to say. Carl is sleeping. He can sleep a lot... 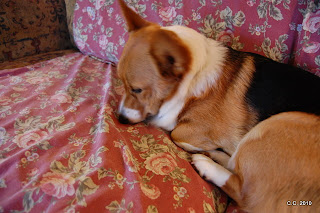 He's my uncle, you know. He's two. He can get cranky like Farmlady, but I like him. When I run around him in circles and jump on him, he gives me "the look" and growls a little. I have learned a lot from him. He's my best friend.
Well, time for lunch and then I think I will go lie down for a while and catch a few....
Merry Christmas everyone. May you all find  lot's of biscuits in your stockings.