"Thank you for wearing the bracelet....."

It was 1973 and we had just moved to Antioch, Ca. We bought a new home and I had recently  given birth to my second son. It was a busy, happy time in our lives.  The news was always and incessantly about the unpopular war over in Vietnam.  I was very upset about the Vietnam War and the losses that seemed endless. I wanted to do something and felt guilty that my lifestyle didn't seem to show any of the concern that I felt.
I was never comfortable with the protests down in Berkeley and most of the people that were joining the anti war rallies were more about being there and making lots of noise  than being truly committed to the cause.  I know there were some who were dedicated, but the mass of demonstrators were, I thought, there for the thrill of it. I wasn't sure that I wanted to make any statement  that would have reflected on our troops over there so my body didn't protest....  but my feelings were strong and my prayers were for our men over there that didn't understand the confusion of this war anymore than we did.
So, in 1973, I hear about a new program that was selling bracelets with names of soldiers that were missing in actions or prisoners of war. (Here is a site that give some history on this.) This was something I could do to support our troops and make a statement. 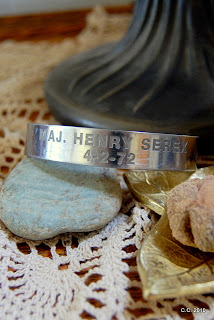 It was not a fancy bracelet. Just a piece of metal with a name and a date. That's all. The name.... Major Henry Muir Serex and he was shot down with his crew on April 2, 1972. I wore this bracelet for years and then, at some point in my life, I put it away, with the letter from his wife..... 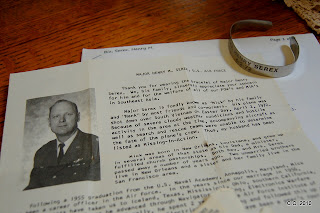 and the information I have gotten on the P.O.W. network. Every year either on Memorial Day or Veterans Day I take the bracelet out and put it on..... then I read the letter. His two daughters are 51 and 48 now. They will never know what happen to their father.
There is a long history of  mis-information, called off rescues, cover ups and withholding of information to families of MIA's . Major Serex is just one story. I would hope that in their lifetime these daughter of a proud and committed career officer in the Air Force will get some answers.
"Major Serex is fondly known as "Mick" by his family....His plane was shot down over South Vietnam on Easter Day, April 2, 1972..... rescue teams were unable to determine the fate of the plane's crew. Thus, my husband has been listed as Missing-In- Action."
" We sincerely hope all POW's will soon be released and all MIA's fully accounted for.With your help, support and prayers, it may become a reality  in the near future and not just wishful thinking. I will keep you posted when my husband's status is changed."
That was 37 years ago.It haunts me to this day...... 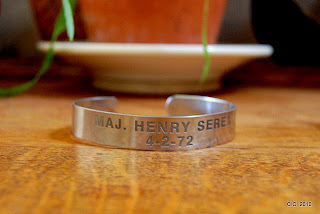