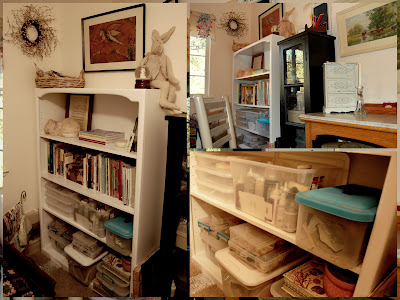 This is what I have been doing all weekend. No blogging, no surfing the net and no whining about my messy house. I have been a busy bee and , with the help of my old Prospector, getting some furniture moved around.
I was in kind of a funk on Friday. That's what I call a small depression of the mind. I know from experience that the best thing I can do, when in a funky mood, is something physical. So, on the weekend, there was no blogging, or letting myself wallow in problems that have no solution at the moment or trying to find answers that haven't appeared yet. No! It was time to "get physical".

First we got the newly painted bookcase into the guestroom/craft room. Then we moved a few pieces of furniture, from other places in the house, into one location so that I can FIND everything without cruising the whole house for some lost container. At least this confines my madness to one room. I do still have to use the kitchen table for most artwork, so I will need a bigger table in this room.
There will be some shelves on the wall later and possibly another cabinet above the bookcase , if it ever gets painted. I have a table in the garage, also ,which needs to be painted. Will this ever end? I'm not willing to get rid of the bed so I can have the table under the window. But,this is where it should be and where it would have wonderful light and then I could put rolling storage bins underneath.
There are no photos of the other side of the room because..., well..., it's still a mess. But today is new day, folks. 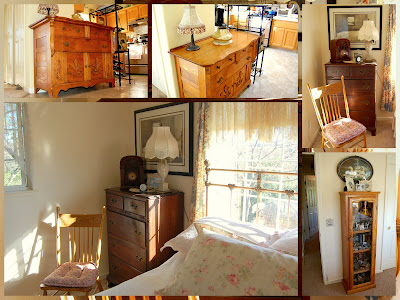 My mother's beautiful buffet is in the house now. The top of it is still in the garage, in pieces, and waiting for a "rebirth of wonder" as Ferlinghetti would say. I call it sanding and staining. The Prospector calls it a lot of work. This is the "default" place for it right now, until I sell the piano( which I don't really want to do.). It may stay here for a while..., but it's in the house and safe. The black cabinet that was on that wall is in the guestroom now.
We moved a chest of drawers from the guest room to our bedroom. Now my husband has a more "masculine" corner; a place to sit and room for his socks and "stuff" (He has stuff too. I'm not the only collector around here). It looks much nicer than my old fufu dresser with the girly things on it but I do miss the mirror. We will have to work on that.
We moved the "gold" cabinet from the hallway into the bedroom. It looks a lot better than the old white hamper, don't you think?
Finally, after almost 13 years, things are falling into place..., sort of. Well, "falling into place" isn't quite the right figure of speech, but let's be kind about this, because soon they will have a syndrome with a special name for what it is that I suffer from. Something like the "clutter syndrome" or an "accumulation disorder". It will be as common as ADHD, and the cure will be to MOVE and take only half of everything with you. You have no idea how difficult that would be. Does anyone know if there is a twelve step program for this disability? I don't want an intervention..., so don't even drive up this mountain with a moving truck. 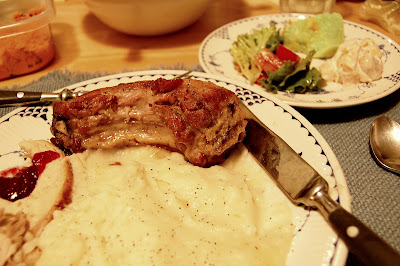 Now, for a little change of pace. Dinner Saturday night was mostly leftovers that were sent home with us from Thanksgiving but I made something else that I have to tell you about. ...
I have a childhood friend, who I found recently. Actually, she found me and it's a very long and wonderful story which I will tell you about in a separate post. Anyway, she sent me a recipe for TURKEY NECKS and you have got to try this. They are delicious. Here's what you do with them.

Boil the turkey necks for 1-1/2 hours in water with 2 chicken bouillon cubes, 1 tsp. poultry seasoning, slice of onion(size doesn't matter! just a chunk for flavoring),1 cut-up rib of celery. When done, remove and put in a roasting pan and baste with margarine (or, I prefer 3 Tablespoons of Olive oil & 1 Tablespoon of butter), salt lightly and bake at 400 degrees for 10-15 minutes on each side to brown and crisp a little.

That's it. I'm telling you..., these were so good with all the leftovers ( especially mashed potatoes) and tasted so much better than "white meat" turkey. This is going into my "really good" recipe folder for future fixings.

Well..., got to go. I've got more clutter removal to do this afternoon. This is so satisfying. My friend "C" would be proud of me. She has the beautiful, white, uncluttered, simple living apartment down in Sacramento that I so admire. I will never achieve what she has done because I'm such a "furniture person" and a hoarder, but she is my shinning example and that goal , that "ring" that I reach for on the merry-go-round of my cluttered life.