The California Cows are not Happy 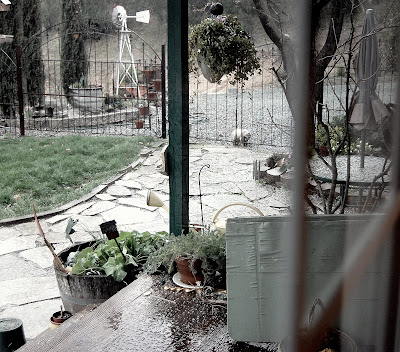 The night before last we had a wind storm. This is what we woke up to in the morning. The table on the porch was tipped over and pots were upside down. There were broken pieces of containers scattered around and everything was leaning toward the southeast. Then it started hailing..., then we had lightening and thunder( and whining from Maggie, our shepherd, because she hates thunder). 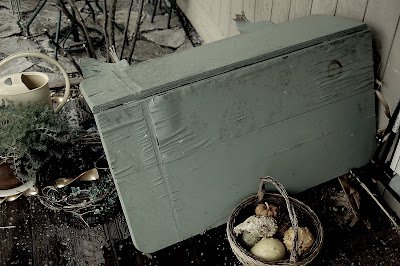 The poor old drop-leaf table was in bad shape to begin with, but this kind of abuse might be it's death blow. I think I'll just leave it on it's side because the wind has continued to blow, off and on, for two days. THE CALIFORNIA COWS ARE NOT HAPPY RIGHT NOW. 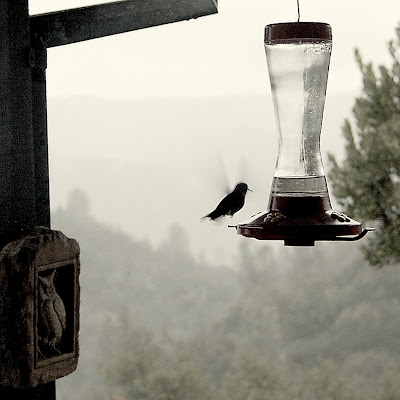 Well, look who arrived in the middle of the hail storm. Our resident Hummingbird who never goes south for the winter because we usually don't have weather like this, has been hangin' on the porch all week. He has been trying to get a sip of sugar water from the feeder. This is fun to watch because it's like watching a helicopter land on an ship in a bad storm. He waits, plans his move and then goes for the landing. He's getting very good at it. Then he hangs on for dear life, sips his fill and flies off across the canyon. I worry about him; thinking that the wind and the rain will catch him and take him down. But, he always returns. There are two of them that stayed this year. I'll bet they are saying, "Holy Cow, We could have been living in the Bougainvillea in Acapulco. What were we thinking?"