Disgruntled Goats: the after Christmas bummers 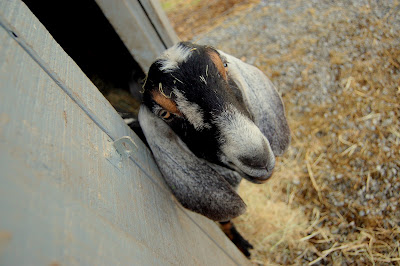 "Hi Bart! Merry Christmas and Happy New Year to you, baby."...., no answer. Farmlady laughs and says, "What's the matter, sweetie, didn't Santa bring you everything you wanted?".... No answer... 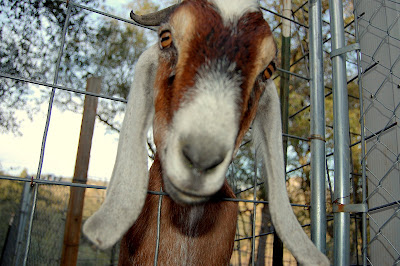 "Hey Brownie, what's the matter with Bart? He seems upset about something, but he won't tell me what's wrong."
"I don't know, farmlady. He's not talking to us either."
"Well, I can't imagine what this is all about. The prospector cleaned out your house and put new straw down. He spent all last week spreading gravel on the ground outside the door, here, so you wouldn't have to walk in mud when it rains. What do you suppose has got him all upset?"
"I just don't know. Maybe he's tired of the cold weather."
" I think you guys are kind of spoiled. Some goats have to live where it snows in the winter..., and they don't have a nice house to go into when the weather is awful. Some goats just have a lean-to and have to huddle together against the elements."
"What are elements?"
"Wind. rain..., snow. You haven't even seen snow yet."
"Oh..., well I still don't know why it has to be so cold."
"You are such summer goats. I just love this weather. This isn't even that cold, really."
"Sure, when you live in that big warm place, over there. Why don't you let us come in there once in a while?"
"Because you're farm animals and you're not potty trained, Brownie. No one lets goats and chichens come into their houses."
There is a long silence while Brownie thinks about what has just been said. Bart walks over to the fence and Brownie says...,
"Bart, I think we have just been insulted."
"I'm not insulting you, Brownie. I love you guys. I just think you forget that you're goats. Don't be offended. Just go find a place in the sun and relax. Just chill out." Farmlady pats them both on the head.
"Chill out? Odd choice of words. What do you think Bart? They want us to eat more grass in the pasture. They decided to stop the good grain because the "goatlady" said it would cause something called STONES..., and now Farmlady calls us spoiled. I think we need a meeting. I think we need a... , what did I hear about...., a union. Things are getting out of control. BART? Don't you think we need a union?" 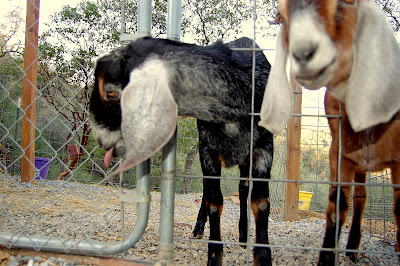 Bart looks at me, then he looks at Brownie. Then, (and I have this documented in the photo above), he stuck out his tongue and said something under his breath. I didn't hear it but I think Brownie did. What do you suppose Bart said? Got any ideas? I don't know what's going on with them. Maybe they really are "Summer" goats. Maybe they have S.A.D. and need more sunlight. Maybe they're just going through their "teens". I don't know. Whatever it is, I wish they would snap out of it. I may have to give them an extra treat and take them for a walk. I'm such an enabler. I just want them to be happy.