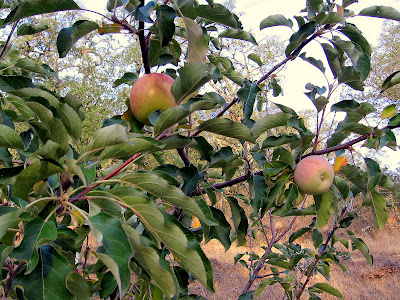 Look at these beautiful apples. They have been doing so well in our orchard and I was just about to pick them. I took these photos a few days ago. There weren't that many of them this year. I don't know why, but there were enough to make a couple of big apple pies. We were looking forward to one yesterday. I walked up to the orchard in the morning, opened the gate and as I walked toward the tree I stopped dead in my tracks. All the apples were GONE...., everyone of them. 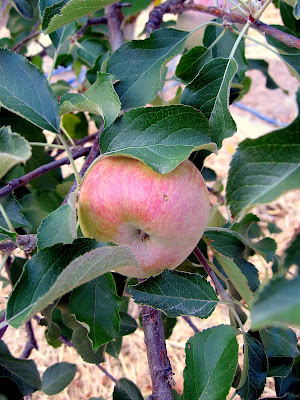 None of the apples were on the ground and there were no half eaten ones left on the branches. Every apple had disappeared. The gate was latched and I saw no breaches through the fence. I don't think that the deer have ever gotton over the fence or any other critter for that matter. We have never had a problem except, of course, for birds. This year the birds didn't seem to be around much and I hadn't even though about using netting, as in other years. I'm at a loss for an answer.
I can't imagine that a person would have done this because we live so far out and away from everyone. It is deer season here in California though and we do have a lot of hunting going on around us. I guess it's possible that a hunter saw the tree and decided to help himself. But every last apple? The orchard is way up the hill near our well and we can't see it from the house. Maybe some hungry hunter forgot his(or her) lunch. But why every apple on the tree? I don't know what to think. There are no footprints to follow and no tell-tale pieces of apple on the ground. This is definitely a mystery for Sherlock Holmes. What do you think?