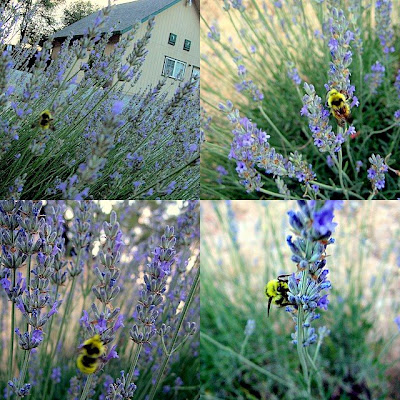 Sometimes you see something so beautiful that you stand in wonder staring at the ability of nature to continuiously outdo itself.

As I finished my walk and came back up to the house last night, I stopped to look at the lavender planted a few years ago in the parking area. There were 5 or 6 big black bumble bees flying around , doing their "bee" thing and moving from one flower to another. Their legs were covered with pollen. Their fuzzy blackness with this bright orange pollen was so striking against the blue lavender that I had to try and take a few photos with my trusty camera (Canon PowerShot) which I carry with me, everywhere. I never leave the house, for a walk ,without a walking stick, my camera and bug spray all over me. It standard issue for hikes or walks around here.The light was beautiful. The sun was gone from our side of the mountain and was making it's last stand on the hills to the east. When this happens the hills produce this amazing ambient lighting that gives everything around it a warm, clear color. A lady I knew once, in a photo club I belonged to, said that the best time to take pictures is early morning and late evening She was right. Middle of the day sunlight tend to take color and defused it so it's not as distinct and true. I don't understand why this happens but mornings and evenings are the best photo shoots. The bees were moving faster than my camera could shoot and none of the pictures were any good. I need a better camera.

While I was making my futile attempt to photograph bees in motion I spotted this bright yellow beauty flying from one flower to another and the contrast was even more striking that with the black bumblebees. This bee was a loner. No others like it were flying around. I must have taken 20 or 30 shots of it, following it in and out of the lavender bush. Bumblebees don't seem to mind my upclose and personal camera and I have never gotton stung. So I dogged this bee and out of all those shots only four were sharp enough to use. The last one was the best.
This is a Golden Northern Bumble Bee: Probably a female because of more yellow color on her abdominal segments and her thorax. I sound like I know what I'm talking about, don't I? Good old National Audubon Society field guides. I couldn't survive without them. Another great set of books for "information junkies".

Some day I'll have a camera that will catch these little dudes in mid air. Untill then , I will continue to take lots of photos hoping that one or two will be really good. One thing that's great about a digital camera is : Delete..., delete..., delete. The other is Picasa2, my photo storage and "photo fix" program. I love it .

By the way: On my walk, I went down the road to the switchback and the Rattlesnake has taken his business elsewhere. He's gone. This doesn't mean another one won't arrive (or that he won't be back) but for now he (or she) has decided not to tempt his fate. Good choice, rattletail!